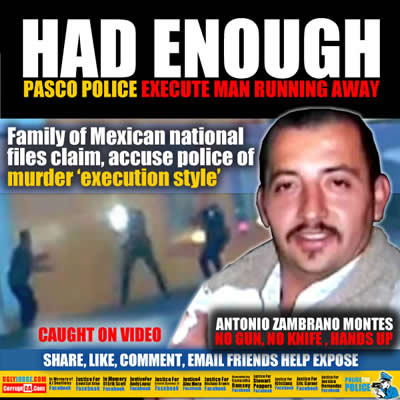 The family of a Mexican national fatally shot by police in Pasco, Washington, has filed a $25 million claim against the city alleging that three officers killed the unarmed man “execution style.”

Antonio Zambrano Montes, 35, was shot by police Tuesday after he allegedly hurled rocks at vehicles and Pasco officers.

The city and the police department weren’t commenting on the claim.

The case is attracting attention because a video posted on YouTube shows Zambrano running across a street with police in pursuit before he was fatally shot. The shooting has sparked local protests and anger at what some say is another example of police brutality and excessive force against an unarmed man who is a minority.

An investigation is under way into three Police officers with the Pasco Police Department in Washington State after cops shot and killed a man this week who had reportedly been throwing rocks at officers.

Video footage from the incident appears to show the victim, 35-year-old Antonio Zambrano Montes, fleeing on foot from three Pasco police officers across a busy intersection with arms akimbo. The man then turns and faces the cops with his arms in front of him when a barrage of gunfire — as many as 13 shots, according to some accounts is fired from their guns, fatally wounding him.

Eyewitnesses say Zambrano-Montes was unarmed at the time of the shooting and, according to one, was “just trying to walk away” when he was shot and killed.

“This is a very disturbing incident, and our hearts go out to the family of Antonio Zambrano-Montes. Fleeing from police and not following an officer’s command should not be sufficient for a person to get shot,” Kathleen Taylor, executive director of the American Civil Liberties Union in Washington State, told reporters. “Lethal force should be used only as an absolute last resort. Police need to understand how to de-escalate confrontations and use force only as necessary.”

Chief Bob Metzger says  police arrived on the scene moments before Wednesday’s officer-involved shooting after being alerted  a man had been lobbing rocks at vehicles. When cops approached Zambrano Montes, the chief said the man threw at least one “softball size” rock at the officers and then ignored their orders to put down the rest of his projectiles, prompting the police to deploy their Taser stun-guns “with no effect on the subject,” according to Metzger and eyewitness accounts. At least two officers were injured by the rocks, according to the Seattle Times, and were treated at the scene.

Video footage purported to be of the shooting surfaced to the web shortly after the incident quickly unfolded, propelling the ordeal to the forefront of local news on Wednesday and raising questions from residents, including those who saw Zambrano Montes killed with their own eyes.