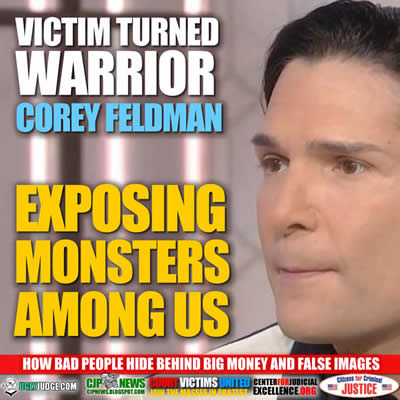 Corey Feldman is a true warrior going up against enormous power and money. Most of America does not understand or comprehend how utterly bad our justice system has become. Judges and police are nothing more than simple whores to money and power. Imagine lawyers legally being allowed to make up stories, lies and blatant perjury without any fact or evidence. All with the purpose to help dishonest people with money escape prosecution or any accountability.

Feldman (The Goonies, Gremlins) starred alongside actor Corey Haim—who died in 2010 at age 38—in the 1987 vampire movie The Lost Boys. The two became the among highest paid teen actors of the 1980s and became known as “The Two Coreys.” Feldman has since repeatedly alleged that he and Haim were the victims of sexual abuse by prominent figures in Hollywood.

THE BIG QUESTION IS WHY IS LAPD NOT INVESTIGATING THIS OR TAKING IT SERIOUS?

Supporting Videos
MY TRUTH: THE RAPE OF 2 COREYS-An introduction by Director Brian Herzlinger

Inside Corey Feldman’s Strange Screening for ‘(My) Truth: The Rape of 2 Coreys’
Cory Feldman Breaks His Silence