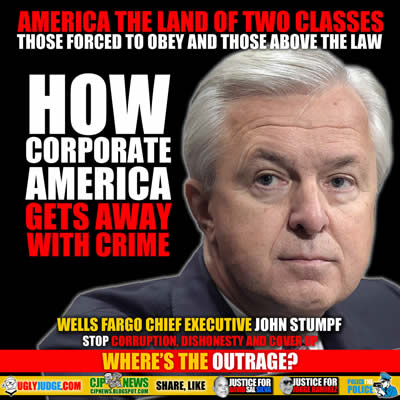 Despite testifying under oath that he didn’t learn about Wells Fargo’s fake account scandal until late 2013, there’s reason to believe that Wells Fargo John Stumpf knew about the scam years earlier.

Wells Fargo John Stumpf is a perfect example of someone “Above the law” which means he can rob, steal, lie, cheat and even murder and never spend a day in jail. What those above the law do is resign and slither away like the slime they are only to turn up somewhere else and continue to commit their crimes.

The chairman and chief executive of Wells Fargo & Co., John Stumpf, has resigned in the aftermath of a scandal over the bank’s past practice of secretly selling services to unsuspecting customers. Wells Fargo has been hammered in recent weeks by critics who say the bank unfairly took advantage of customers to meet sales targets. In September, the bank agreed to pay $185 million to settle charges that it had opened as many as 2 million accounts without the knowledge or approval of customers. Even though he left on a low, John Stumpf, former CEO of Wells Fargo, will take about $133.1 million into retirement.

The beleaguered executive retired Wednesday afternoon as investors, lawmakers, and consumers grew increasingly frustrated with how John Stumpf handled the fallout of the bank’s phony account scandal. He first denied that the bank’s culture had led to the 2 million credit card and deposit accounts opened without permission. Instead, he blamed some 5,300 bad employees who had been fired. Before Congress in late September, he denied that the scandal was as grave as they saw it—fanning their ire, leading the bank to clawback a portion of his pay. The bank said that John Stumpf would not get a severance package.

But despite that, and giving up $41 million, John Stumpf is still walking away with a pay package that goes into the nine figures, according to executive compensation research firm, Equilar, showing how large CEO pay packages are, even after executives are punished for significant mistakes.

When I think about John Stumpf, the now-disgraced former chairman and CEO of Wells Fargo(NYSE:WFC), I’m reminded of those stories you see on TV about the guy-next-door who had been living a secret life for years.

“He seemed so normal,” neighbors would say. “He always showed up to work on time and did his job,” co-workers would add.

But then, for one reason or another, everything would come crashing down. Something would cause someone to peek behind the thin veneer of respectability and discover the truth. In Ken Lay’s case, it was the recession following Sept. 11, 2001 that revealed the inner machinations at Enron. In Bernie Madoff’s case, it was the financial crisis that caused his multibillion dollar Ponzi scheme to collapse.

And in John Stumpf’s case, it was a fake-account scandal in which low-level employees were, if a growing multitude of allegations are to be believed, all but forced to commit fraud in order to keep their jobs and boost Wells Fargo’s performance and thereby John Stumpf’s voluptuous paycheck — he earned $20 million a year.

Wells Fargo Chairman and CEO John G. Stumpf, who has been described as “the Mr. Clean of banking,” took his unflappable and well-groomed mien Tuesday to a hearing room on Capitol Hill to defend the bank against allegations that it had massively defrauded millions of its customers.

Amazingly, he made himself and his bank look worse. This underscores the question we asked just a day ago: Why does he still have a job?

The context of this question is the disclosure that Wells Fargo bankers opened as many as 2 million fake accounts in the names of existing customers and others, without their knowledge and permission, and stonewalled their inquiries and complaints. The scam went on from at least 2011 through 2015, though John Stumpf revealed that the bank is now reexamining accounts from as early as 2009. On Sept. 8, it announced an agreement to pay $185 million in fines and penalties to two federal regulators and the Los Angeles City Attorney’s office.

You should resign. You should give back the money that you took while this scam was going on, and you should be criminally investigated.— Sen. Elizabeth Warren confronts Wells Fargo CEO John Stumpf

The bank’s explanation has been that this was all a scheme mysteriously concocted by “rogue” employees coast-to-coast, of whom 5,300 have been fired. John Stumpf denied on the stand, as he has in interviews, that the root cause of the outbreak of dishonesty was Wells Fargo’s relentless pressure on low-level bankers to “cross-sell” products — push credit cards, personal loans and other deals — upon all customers. He stoutly denied that the company’s “culture” contributed to the problem.