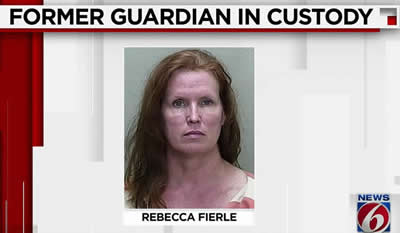 Guardian Rebecca Fierle
The Florida professional guardian charged in connection with the death of a senior in her care is now scheduled to face a judge later this month.

Rebecca Fierle, the disgraced guardian at the center of Florida’s guardianship scandal, was released from the Marion County jail on Tuesday, February 11, 2020, the morning after her arrest on charges of aggravated abuse and neglect of an elderly person

A court has ordered Rebeca Fierle to appear in person for an arraignment hearing in Tampa on March 23.

State agents have charged Rebecca Fierle with felony counts of aggravated abuse and neglect of an elderly person.

The charges stem from the death of Steven Stryker, 74, of Brevard County, who died in a Tampa hospital in May 2019. Stryker’s family says AdventHealth and RebeccaFierle illegitimately obtained court-appointed guardianship over Stryker. While acting as Stryker’s guardian, Rebecca Fierle filed a “do not resuscitate” order against the family’s wishes and ordered his feeding tube capped against the advice of doctors, investigators say. Both actions directly contributed to Stryker’s death, they say.

Stryker’s daughter, Kim, filed a complaint with the state, which led to a series of criminal investigations and Rebecca Fierle either being removed or resigning from hundreds of cases statewide.

Rebecca Fierle herself refused to answer questions after being released from jail last month. Video of her arrest, obtained by Spectrum News, shows the guardian seemingly at ease during the interaction with a deputy at her door, at times laughing, and telling the deputy that she had reached a deal with prosecutors to turn herself in.