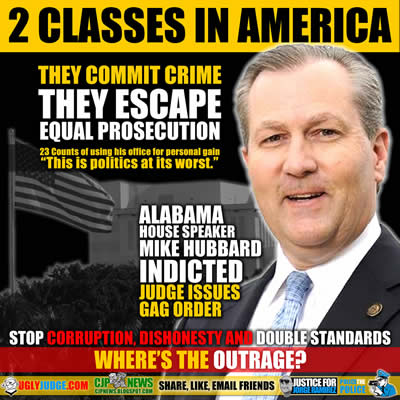 Alabama House Speaker Mike Hubbard indicted for 23 counts of using his office for personal gain and soliciting things of value while in office.

When police kill innocent, unarmed people the first thing they do is leak false info attempting to destroy the character of the victim and help the public opinion rationalize their actions. Yet when they’re exposed of a crime our courts help them avoid prosecution, seal records and hide previous crimes and murder The double standards and two classes in America must be exposed.

Alabama House Speaker Mike Hubbard, the architect of the state Republican Party’s remarkable turnaround, was indicted Monday on 23 counts of using his office for personal gain and soliciting things of value while in office.

Hubbard on Monday turned himself in to the Lee County Jail, where he was photographed and booked. In a video posted to Facebook, Hubbard called the charges “a political witch hunt.”

“This has been going on for two years, dragging on and on, and here they come two weeks before an election and make these allegations. The fact is that we’ve done some great things in this state and some powerful people don’t like it,” Hubbard said in the video. “This is politics at its worst.”

Hubbard’s lawyer said he will hold a press conference Tuesday to rebut the charges. Hubbard reported to the Lee County Jail where he was booked.

If convicted, Hubbard faces a maximum penalty of two to 20 years in prison and up to $30,000 in fines for each count.

Hubbard, 52, who led a historic Republican takeover of the state Legislature during the 2010 election, was charged after an investigation in his home county that has lasted more than a year.

The charges against Hubbard include 23 class B felonies. Those charges include:

Most gave Hubbard what he wanted, according to the indictment, including major investments into Hubbard’s company, Craftmaster Printing.

AS REPORTED BY…
“Speaker of the House Mike Hubbard, R-Auburn, through his business interests has made almost $9,000,000 off of State Government related entities and political campaigns.”— AL Reporter, Apr. 30, 2014

“Of course, Hubbard not only used his office to prosper financially, he used his power to ruin the lives of anyone who would dare stand in his way.”— AL Reporter, Nov. 25, 2013

“Most speculation is that Hubbard’s political contributions and those of legislators in general are the focus of the grand jury.”— Gulf Coast News Today, Jan. 3, 2014

“Then, there is Speaker Hubbard, recently caught with his hand in the proverbial cookie jar, impotently rationalizing his own brand of cronyism and profiteering with Auburn Network Inc. and its clients by using the imaginative argument of, ‘They did it, too!’ According to the Alabama Ethics Commission, Hubbard isn’t doing anything to directly benefit the businesses he’s associated with, but they sure do seem to get an amazing amount of ‘indirect’ compensation and new work.”— AL.com, July 31, 2013