The REAL Cost of Courts that Allow Money, Greed and Corruption to Silence Justice 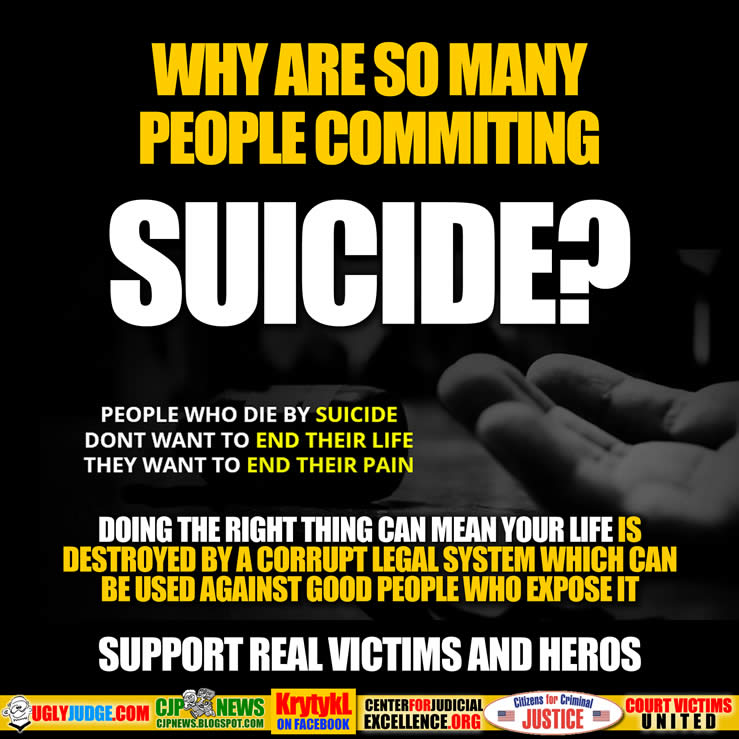 The REAL Cost of Courts that Allow Money, Greed and Corruption to Silence Justice

Most people have no idea how bad our justice system has become and rarely does it get into new. Such as the obvious wrongs like OJ Simpson buying his way out of accountability. What people suspect is actually very true and very out of control today.

We have a legal system designed by lawyers, run by lawyers who profit off a broken system which they’re totally aware of how dishonest it is. Yet they go home to their families each night after violating, abusing and destroying lives without really knowing the depth of how terrible their crimes are.

In my case there are judges, lawyers and government agencies that have been fully informed of elder abuse and over $200k in embezzeled bank funds, fraud, perjury and outright grand theft stealing. Yet none of them stop it or even consider doing the right thing. They all look at one thing, how much money these crimes can make for them.

The judge who gets a home loan to rule in favor of the guilty with money. The police who don’t want to get involved in anything within the court system no matter how wrong. Lawyers who are part of a organized gang which is more like the mafia then anything else.

WIth their selfish, greedy views they have no idea that what they do can totally destroy a live. It’s not just the money but what happens as the guilty parties now use these dishonest rulings to build their side of lies and manipulations to destroy anyone who tried to expose what they’ve done.

Whistleblower rights are bullshit and mean nothing if the organizations that run them don’t apply them. Imagine going to court to expose your own sister is a liar and fraud. A con-artist and psychopath who has always been a skilled manipulator of people and a charmer. What people don’t realize is a criminal is hiding behind a false image of “pretending to be a good child doing the right thing for Mama”. So they don’t investigate the facts, look deeper or even believe hard cold evidence or facts. In my case an entire petition was perjuried by Sylvia Schmidt of San Diego CA and Christopher Overgaard a dishonest Glendale CA lawyer.

The evidence was so obvious as was the motive by a child who never cared or took care of her mother her entire life. In fact the evidence of her obvious hate of everyone in her family and history of adultery, divorce and frioulous lawsuits was never looked into. When Sylvia was disinherited by her father who died around 2000 she did not want to accept she had obviously shown hatred to the man she ignore for over 35 years. It dawned on her that he mother one day would do the same thing to this “BAD SEED PSYHCOPATH CHILD”. So Sylvia and her husband Gary A. Schmidt cooked up a scheme to take over her mother’s life and estate. It started with burgarizing Gertrude Gettinger’s home SEE LAPD Report September 2005. From which Sylvia and Gary A. Schmidt used Identity theft to remove (2) bank accounts with about $200 thousand dollars to which they claimed creditors had removed the funds and blamed it on Robert Gettinger. The fact is there is no evidence any creditor removed the funds due to Robert nor did Robert owe any such money.

Yet when exposed and evidence was provided to the court in the form of a legal petition which exposed even more crimes such as claiming Robert was not living in the USA and Sylvia had no contact. Yet Sylvia Schmidt had Robert’s contact info and was in contact with Robert. There were recent recorded phone calls, holiday cards and cashed sisgned checks all proving Sylvia had contact. Yet the court did nothing, never stopping the forced conservatorship. Investigating the provided bank names and account numbers obviously never reported to the probate department or court.

Chistopoher Overgaard the lawyer and coward from Glendale CA would then bow out where Sylvia Schmidt would hire Philip Barabaro Jr. the President of the Pasadena Bar to begin a series of lies and manipulations using his illegal influence on totally dishonorable Judge Candace Joan Beason. Judge Beason would ignore all the evidence and blatently admit “she sees nothing wrong”. She would even allow the dishonest Sylvia Schmidt to file a writ against Robert Gettinger without notice to bill him for her legal fees.

There are literally volumes of evidence and abuse committed and documents via doctors, nursing home and mail fraud committed by Sylvia Schmidt. The problem is when reported nothing is done. They all use the fact it’s being handled by the court however a disfunctional, dishonest court system. So who polices the courts? Commission on Judicial Performance  You can forget them, it’s a joke that when reported with result in a cut and paste general response (we found nothing wrong).

What happens when you do the right thing?
Nothing you’re ignored
Your attacked to silence you
They try and make you look like a slut or nuts (discredit you and character assasination)
Make you pay for your honesty sending you the bills
Lie to police claiming your a threat
The guilty go on covering things and commit even more crime and abuse

What does this do to the real victims? Well you’ll begin to feel hopeless, abused and depressed
Welcome to Legal Abuse Syndrome
“Warning: Protracted Litigation Can be Hazardous to Your Health”

So says Karin Huffer, whose experience as a marriage and family counselor in private practice and the wife of a businessman who was brutally defrauded in the courts uniquely qualifies her as an expert on the subject.

Huffer discovered that many of the legal system’s victims suffer from a variant of Post-Traumatic Stress Disorder, which she has termed “Legal Abuse Syndrome.” The condition derives from the abusive and protracted litigation that many plaintiffs commonly encounter in the courts.

According to Huffer, you may be suffering from Legal Abuse Syndrome: 1) if you feel deeply disillusioned and oppressed as a result of your experience with the legal system; 2) if you have been frustrated in your effort to obtain justice; 3) if you feel your dreams and plans for your life were torn from you by a system that supposedly was there to protect your rights and property; 4) if you fear that the system will defeat you at every turn and there is nothing you can do about it; and 5) if you feel you have been victimized several times over by the perpetrators, by lawyers, judges, bailiffs and other court personnel. As a consequence, you may suffer from tension and anxiety and have recurring nightmares, and you may also feel emotionally and physically exhausted, numb, disconnected and vulnerable.

Huffer does not call for sweeping reforms of the judicial system to eliminate the corruption that underlies its various abuses. She is no firebrand. Instead, as a dedicated health-care professional, she has concerned herself with helping the stricken to cope with their psychosocial problems — to accept what they cannot change and enable them to function once more as normal, productive individuals.

To this end, she has written a pioneering book that addresses the plight of legal abuse victims from a psychological, therapeutic perspective. Her objective is to move the victim beyond his or her predicament and toward a more positive way of thinking and behavior. Huffer illustrates her approach with the cases of seven victims who suffer from Legal Abuse Syndrome, detailing their pain and anguish and the various stages of the therapy they have undergone to recover their emotional health. While the eight-step program she describes may not remove the thorn from the hearts of legal abuse victims, it will deaden the pain and help sufferers rechannel any destructive thoughts they may harbor.

Despite her mental-health orientation, Huffer is well aware of the troubling conditions that exist in modern American society. On one hand, trusting citizens have been taught they can rely upon Constitutionally protected rights to safeguard them against criminal activity. However, betrayals by lawyers and the failure of courts to provide basic due process rights have assaulted their sensibilities, ignited their rage and turned them into victims and even vigilantes. Clearly, we have entered a time when more vigorous solutions are called for than just compassionate psychoanalgesia. SEE ORIGINAL STORY

SUPPORTING LINKS
HOLDING COURT — A Sick and Twisted System
James’ Story
After Contributing to Bernofsky’s Cancer, Tulane Denied that It Preexisted
THE WALKING WOUNDED Quiet-crime victims assaulted by deceit
Fraud on the Court

Karin Pearson Huffer holds a master of science degree in marriage and family therapy from the University of Nevada at Las Vegas and is the author of Overcoming the Devastation of Legal Abuse Syndrome, Fulkort Press, 1995. She is a frequent lecturer and consultant on litigation-related traumatic stress and can be reached at legalabuse@adelphia.net or through her Web site: http://www.legalabusesyndrome.org.

People seem to forget those hero’s who sacrafice it all and end up in Jail via the same dishonest judge who committed the crimes then abuses his power to stop people who report him such as one of the worst Socrates Peter Manukian who railroaded Cary Andrew Crittenden. Judge Socrates Peter Manoukian has a decades long history of dishonesty, mysteroius bank loans and X wifePatricia Bamattre Manoukian who resides above him protecting his crimes and a long list of victims.

These abuses of the court system by judges, lawyers and government agencies is nationwide and in every type of court
Civil
Criminal
Probate
Family

Faces of Suicide
Spotlight on Suicide
Suicide is desperate. It is hostile. It is tragic. But mostly, it is a bloody mess.

‘You killed our future’: Man throws himself from balcony in Romanian parliament

The number one cause of suicide is Family Law