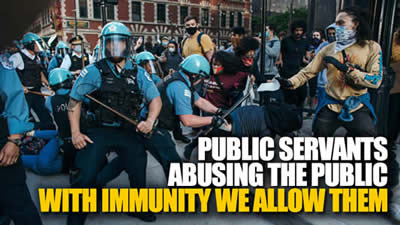 Police Accountability for Brutality: Where is it?

We have all seen the headlines pronouncing yet another unarmed person shot down by the police or succumbing to wounds caused by the use of excessive force. Even children and the mentally ill are not safe from the extreme level of brutality perpetrated by police officers on American citizens every day. To add insult to injury, many of these officers are never brought to trial for their crimes; instead massive cover-ups are used to deflect blame onto the victims and away from the judicial system. This level of corruption and abuse cannot continue. We must call for a reform of police policy and best practices.

Let us consider some of these individuals who were killed by police brutality in the past two years so we can put a name to these victims and be reminded of their humanity. Freddie Gray was walking with a friend when they spotted police officers on bicycles. They both ran. During the pursuit Freddie stopped voluntarily and no force was used as he was placed into custody. While the arresting officer and Freddie waited for a police van to arrive, Freddie asked the arresting officer for an inhaler. His request for medical attention was denied. Shortly after this request, he was loaded into a police van. He was unsecured in the back of the van and thought to be a victim of a ”rough ride”, a police tactic involving jostling an unsecured prisoner around the back of police vehicle by making frequent hard turns and quick stops. The transport driver stated Freddie was acting irate in the back of the van and stopped to place him in leg irons. Multiple witnesses stated when he emerged from the van he looked as if he had been beaten. After several stops, the van arrived at the Western District police station and Freddie Gray was found unconscious in the back of the van and a call for medical attention was finally placed. Freddie was found to have a severe spinal cord injury and later died as a result of these injuries.

Sandra Bland was pulled over for “not signaling when changing lanes”, a minor traffic violation. She was visibly upset for being pulled over, stating that she was simply trying to get out of the officer’s way. The officer forced her out of her car and slammed her to the ground for not extinguishing her cigarette. Sandra can be heard stating she cannot hear after her head was slammed on the ground. This officer was later put on administrative duty for failing to follow proper traffic stop procedure. Days later Sandra was found dead in her jail cell of unclear causes.

Laquan McDonald was walking several feet away from the police, when he swung his body toward police and in that a split second a police officer opened fire.

Sixteen rounds were unloaded into the African American teenager; they riddled his chest, scalp, neck, back, arms, right hand and leg. The officer stated he was armed with a small pocket knife and was trying to flee. Officer Van Dyke was subsequently charged with first degree murder, a rarity in many cases of police brutality.

Law enforcement officers take an Oath of Office upon becoming a police officer, which in part reads:
“On my honor,
I will never betray my badge,
my integrity, my character,
or the public trust.
I will always have
the courage to hold myself
and others accountable for our actions.
I will always uphold the constitution
my community and the agency I serve.”

Before any officer takes the Law Enforcement Oath of Honor, it is important that they fully understand what it represents. This oath is supposed to be solemn pledge an officer makes when they sincerely intend to uphold the law. This oath should not be taken lightly and it should never be broken.

Far too often police officers use excessive force and subsequently this criminal use of force is covered up. This cover up often reaches the upper levels of the police force and the justice system. We are all aware there is a flaw in the system. In the United States there are more prisons than there are colleges. We spend almost $70 billion annually to place adults in prison and jails and to confine youth in detention centers. The judicial system has an agenda to protect their own above the need of the people for justice to be served. They tend to flock around their police forces whenever any accusation of police brutality occurs, rather than rally around the community that they serve. Perhaps if the lawsuits were targeted at the individual officers and the entire police force as a whole, they would think twice about the level of force appropriate for the situation.

According to Erwin Chemerinsky, dean of the UC Irvine Law School, “recent Supreme Court decisions are not the path towards justice, but rather a series of obstacles to holding police accountable for civil rights violations”. For instance, take the grand jury’s failure to indict the police officer who fatally shot John Crawford III, the black man holding a BB gun in a Walmart. Because this happened in a country where shooting sprees happen every day , where guns are widely available at Walmart and where fake guns look very similar to real guns that are sold in the same store, the police officers’ fears were deemed reasonable enough for the grand jury to find no probable cause of criminal wrong doing.

Eric Garner was apprehended by NYPD officers for the crime of selling loose cigarettes. He was not armed and he did not resist arrest until he began having trouble breathing because he was in a chokehold.

The chokehold that NYPD officer used to strangle Eric Garner is not prohibited by law. However, it is by prohibited by NYPD departmental rules. What happened to Officer Daniel? He didn’t pay a dime in damages nor did he serve time in prison. But the City of New York has agreed to pay $5.9 million to settle the wrongful death complaint filed by Eric Garner’s family members, according to the New York Times. If the city agrees his death was wrong, then why are his murderers left unpunished?

The first step to understanding the issues with the police is to get rid of the fantastical notion that the police can police themselves. The reality is, it is extremely difficult to get law enforcement to justly and fairly police itself. The law is not on our side, it is firmly on the side of the police who open fire on unarmed civilians.

Now brothers and sisters what are we going to do about it? How can we, the average American citizen serve and protect ourselves? How do we protect ourselves against the police who have sworn to protect us?

There is a growing movement that calls for police departments to use body cameras to record all interactions between officers and the public. The idea is that this will serve as an objective source of information that could act as a check on the police behavior as well as evidence when there is an incident. While the video is often held up as the gold standard, it’s not perfect evidence, even when clear video exists. And all too often it still does not lead to an indictment. But who’s in charge of the footage, storage, analyzing and disseminating the camera footage? There needs to be a policy in place for such a program, a policy that doesn’t leave the evidence solely in the hands of the police force.

Police demilitarization and new policing models are all projects that could work across America.

We should change the residency requirements of municipal police officers so that they must live in the communities they serve and hire a more racially diverse force might help in cities such as Ferguson, Missouri. These “big-picture” reforms are fundamentally political solutions that will require a long term effort and a coalition of people that spans race, ethnicity and political affiliation. Yes, it will be a challenge, but also a necessity.

Political support is crucial for establishing an effective resolution. As Americans, let’s encourage a transparent judicial process, too often prosecutors issue indictments in a secretive way. Let’s call for legislation that requires that an outside/independent prosecutor be brought in to handle cases involving law enforcement officers. Let’s demand that lawmakers to establish clear guidelines for handling cases involving law enforcement.

In general, we understand that public servants have to be held accountable and that it’s best when it comes from an outside force. This is why our politicians face an electorate, why Congress can investigate the executive branch, and why federal agencies are audited. Checks and balances are a fundamental part of our government and police forces should not be excluded from this necessary safety measure.

In the last few decades there has been a profound divisiveness between the police and the communities they serve. Like a lot of people, I feel some hostility toward them because there has been so much abuse of power, but, I am also trying to see things from their perspective as well. I had a conversation with a detective a few years ago that made me think about the police’s unique experiences with people. Police officers see a lot of the dark side of humanity, and with that comes a kind defensiveness that is always on and so are the assumptions about people and their intentions that go along with it. However, police should be mindful of what Nietzsche said, “Whoever fights monsters should see to it that in the process he does not become a monster. For when you gaze long into the abyss, the abyss will gaze back into you.” It is a thin line they walk and in the end, they are fallible humans as we all are. It is imperative they remain connected to their communities so they are reminded of the good people they are serving and protecting.

But we must protect ourselves and our communities against the one who shoots our brothers and sisters as they go about their daily lives. Let us hold up the outstanding ones and punish the corrupt ones, so that our society can move forward as a peaceful, whole, protected community.