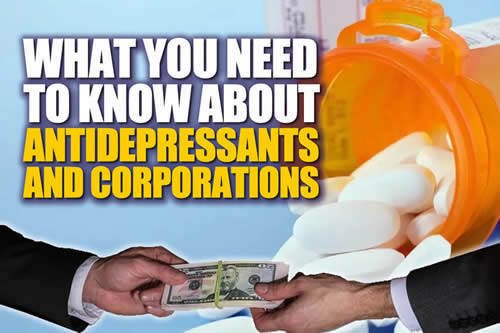 Sad how money can make what is usually a crime a legal business but in the end causes the same abuse and hardship to the world and public. Is this yet another case of lawyers violating their legal bar codes in favor of profit and greed?

The point here is big money often uses the legal business to change law, extort or undue influence the public or media. All in the name of selling a product that could be dangerous or addictive?

The-antidepressant-debate
Lost Connections surrounds the plentiful claims that antidepressants are mostly ineffective, that this ineffectiveness has been concealed by the pharmaceutical industry thanks to inefficient regulatory systems, and that the physiological mechanisms sometimes suggested as triggering depression are not supported by evidence.

“Telling people, as I was told by my doctor, that depression is caused by a problem in your brain is, firstly, untrue,” said Hari to The Guardian.

These claims alarmed health professionals and journalists, who are now concerned that the book will prompt mental health patients to stop taking their medication without consulting a doctor.

Meanwhile, others were more worried about the veracity of the claims that Hari used — particularly his soundbite that “between 65 and 80 percent of people on antidepressants are depressed again within a year” — and questioned whether they could be supported by peer-reviewed scientific papers.

Lexapro and SSRIs In General: What Women Should Know

Lexapro, also known in its generic form as Escitalopram, is an anti-depressant medication that is part of a class of drugs called selective serotonin re-uptake inhibitors, or SSRI’s. Released to the public in 2002 by its manufacturer, Forest Laboratories, Inc., (“Forest”), Lexapro has been considered highly effective in the treatment of certain conditions such as anxiety, depression and other related disorders.

Notwithstanding the purported benefits of taking Lexapro, a number of birth defects have been linked to the use of this drug during pregnancy, such as:

Pharma companies are being accused in lawsuits of paying doctors to push off-label uses of their drugs or financially rewarding doctors for prescribing their brand-name medications.

Drug companies say the millions of dollars they pay physicians for speaking and consulting justly compensates them for the laudable work of educating their colleagues.

But a series of lawsuits brought by former employees of those companies allege the money often was used for illegal purposes — financially rewarding doctors for prescribing their brand-name medications.

In several instances, the ex-employees say, the physicians were told to push “off-label” uses of the drugs — those not approved by the U.S. regulators — a marketing tactic banned by federal law.

In the past three years alone, pharmaceutical companies have anteed up nearly $7 billion for settlements in cases such as one filed by Angela Maher, a former drug sales rep for Ortho-McNeil Pharmaceutical.

Maher sued the company in Massachusetts federal court in 2003, alleging it pushed an anti-seizure drug for 27 off-label uses. She said company officials rigorously tracked whether their payments to physicians were worthwhile.

Maher said she would regularly hear commentary from her boss after a physician spoke at a dinner program: “‘After he talked last week, our sales went up 8 percent’ or ‘I listened to doc ABC and he barely mentioned’” the drug.

The company settled for $81 million earlier this year and pleaded guilty to a misdemeanor charge of misbranding a drug; Maher was awarded $3 million.

Highlight story that explains so much
Antidepressants: Do they really work?

What People are reporting
Reviews for Lexapro

VIDEOS
Do Antidepressants Work or What?

Doctors Don’t Talk About Side Effects of SSRI Antidepressants. How they cover up the bad news

There’s No Such Thing as an Antidepressant: UCLA Professor David Cohen, PhD

Document Details Plan to Promote Costly Drug
The pharmaceutical industry has developed thousands of medicines that have saved millions of lives, but it has also used its marketing muscle to successfully peddle expensive pills that are no more effective than older drugs sold at a fraction of the cost.

No drug better demonstrates the industry’s salesmanship than Lexapro, an antidepressant sold by Forest Laboratories. And a document quietly made public recently by the Senate’s Special Committee on Aging demonstrates just how Forest managed to turn a medicinal afterthought into a best seller.

The document, “Lexapro Fiscal 2004 Marketing Plan,” is an outline of the many steps Forest used to make Lexapro a success. Because of concerns from Forest, the Senate committee released only 88 pages of the document, which may have originally run longer than 270 pages. “Confidential” is stamped on every page.

But those 88 pages make clear that one of the principal means by which Forest hoped to persuade psychiatrists, primary care doctors and other medical specialists to prescribe Lexapro was by finding many ways to put money into doctors’ pockets and food into their mouths.

The United States Senate Committee on Finance (Finance) has jurisdiction over
the Medicare and Medicaid programs and, accordingly, a responsibility to the more than
100 million Americans who receive coverage under these programs. As Chairman and
Ranking Member of the Finance Committee we have a duty to protect the health ofa11
Americans and safeguard taxpayer dollars authorized and appropriated by Congress for
health programs.

On August 5, 2009, you sent us a letter requesting documents related to
continuing medical education (CME) and other issues regarding the relationship between
industry and academia. We are attaching several documents to this letter that are
responsive to this request with the understanding that these documents are now public.

Thank you for your attention to this matter and dedication to transparency. If you
have any questions, please do not hesitate to contact Christopher Law with Senator
Baucus or Paul Thacker with Senator Grassley at (202) 224-4515.

EXECUTIVE SUMMARY
Fiscal Year 2004 (FY04) still marks the launch phase for Lexapro TM, escitalopram oxalate. This
document outlines Forest Laboratories, Inc.’s marketing plan for the continued launch of Lexapro in the U.S. market. This plan covers all aspects of the launch period including a market analysis, objec1ives. SWOT analysis, critical issues, a detai1ed description of FY04 strategies and tactics, including the launch of the generalized anxiety disorder (GAD) indication in Q4 FY04.

LEXAPRO DEVELOPMENT
On August 12, 2002 Lexapro received approval from the FDA for the treatment of major depressive disorder. After stocking the trade and training the sales representatives. sales force promotion of Lexapro commenced on September 5, 2002. As of.April 1, 2003, Lexapro has 10.4% of the new prescription market .hare and 7.7% of the total prescription market share. This market share demonstrates the initial success of Lexapro’s launch. Lexapro is ~t1y tracking as the sixth best launch in pharmaceutical history with a high likelihood of surpassing Viagra” (sildena61 Citrate)’ and Clarinex,” (desloratadine)2. which began declining after initial spikes in the first 4 months of launch. Although Lexapro has encountered initial success, the aggressive launch phase continues as current and upcoming SRI competitors are increasing their efforts.

Further motivation for the competitive response can be gleaned from the fact that Lexapro’s gains in new prescription market share have come at the expense of all competitors, not just Celexa. As of April I, 2003, 50% of Lexapro’s growth has come from Celexa and 50% from the other competitors. primarily the Paxil (paroxetine hydrochloride) franchise. Since the launch of Lexapro, every SSRI has lost market share and the growth for Effexor XR (venlafaxine hydrochloride) has slowed down. However, since January of 2003, the competitors are beginning 10 rebound as Effexor XR has slowly continued its growth, Zoloft” (sertraline hydrochloride) has steadied its declines and even the fluoxetine franchise has stabilized. Furthermore, another Eli Lilly compound, Cymbalta TM (duloxetine hydrochloride), an SNRI used in the treatment of MOD with a potential focus On pain and other somatic symptoms is due to launch in FY04. For all of these reasons, in FY04, Lexapro will need 10 increase its competitive efforts in order to combat the competitive responses and new competitor entries.

. COMMUNICATION OBJECTIVES
• Communicate the positioning of Lexapro across oll promotional venues: “Lexapro, the
single isomer of Celexa, is an. effective first-line SSRI for all adult depressed patients,
which offers superior efficacy and tolerability over all SRIs”

• Incorporate the seven key selling points in every program

• Improve the formulary position of Lexapro in the SSRI class by:
1) Continue to establish favoftble tiered copay position for Lexapro versus
competitors

1) Develop ongoing coaching tools for District Manager’. to implement on a
continuous basis with field representatives

The antidepressant market is the most heaviIy detailed category in the pharmaceutical industry. It is
therefore imperative that Lexapro maintain SOV leadership in FY04 by:

• Expansion contingencies: Prepare for internal disruptions in the field due to the promotion of
other products and potential launches

“OUT PERFORM” IN ALL SEGMENTS
In order to achieve market dominance, Lexapro cannot lag in any market segment In FY04,
Lexapro will out perform in the following market segments

• Provider (psych): Accelerate psychiatry penetration and make Lexapro the standard of care. Be proactive with selectivity message to address competitors head on

INNOCULATION
In an effort to be prepared for the expected and unexpected attacks from competitors and
competitive entry, it is necessary to predict and provide responses for such situations. A number of
issues effecting Lexapro have been identified They are:

There have been a trend in the SRI category of promoting reuptake inhibition at more than one
receptor site IS a benefit to patients in terms of efficacy. Product such as Effexor XR and duloxetine have reuptake inhibition at multiple sites (5HT and NE). Even SSRIs such as Zoloft and Paxil have promoted their more modest effects It the Dopamine and NE receptor sites respectively. The promotional message from these findings has focused on enhanced efficacy versus products that have their primary effects mediated by reuptake blockade It only the serotonin receptor site. Since Lexapro is the most effective SSRI, it could be the subject of criticism relating to this issue.

Lilly is poised to Iaunch Cymbalta (duloxetine HCL) an SNRI that will be positioned as a dual action agent from its starting dose and as the “new standard of depression therapy.” Lilly is putting focus on the somatic symptoms of pain in their depression trials and may pursue this Indication in the
future. Currently, Lilly has some manufacturing issues at its Indianapolis plant that has delayed the launch. However, when approved, Cymbalta could be a major threat as Lilly has tremendous resource potential.

GlaxoSmithKline is currently In litigation with Apotex regarding the patent of Paxil and the availability of generic paroxetine. There is a strong likelihood that this will not occur until late 2004 or 2005; however, Lexapro must be prepared especially in managed care arenas with the introduction of a second generic to the class

Although a completely different regulatory environment exists in Europe, news and events there may have an adverse affect on the U.S. market. Labeling language and potential non-approval in certain countries may have a negative effect on Lexapro in the U.S. market.

The FY04 tactical plan contains many field and non-field based programs to continue the successful launch of Lexapro. All tactics are designed to increase promotional share of voice and help Lexapro outperform In all market segments of indications (anxiety), providers (psychiatrists), third-party
payers (managed care) and age group. (pediatric and geriatric development programs). The launch of the GAD indication will also assist Lexapro achieve market dominance in years to come. With more data and indications on the way, Lexapro promotion will remain strong throughout the immediate future.