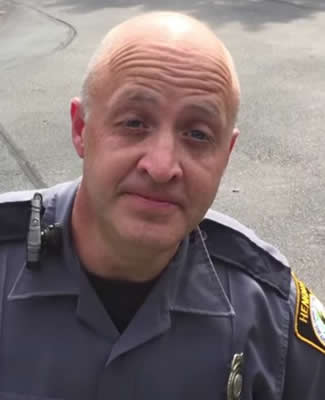 Police Officer John L. Hughson appears to have some mental issues as well as insecurity problems. Demanding ID from a citizen doing nothing wrong and merely just video taping in a public place. Via video and audio its obvious this problem child loves to play the big shot, arrives and creates a problem.  Officers like this create lawsuits, endanger the public and do nothing for the salary their paid. Showing up with an attitude and forcing your authority where its not needed is the problem and that should be addressed.

Hey Officer John Hughson  Kyle Hammond did not violate any law. Where did YOU get your law degree? Stupid is as stupid does they say

We commend Kyle Hammond for doing the right thing, while most people would comply and be on their way. Hammond took a stand for his rights. Something most people won’t do thus all of us are slowing losing those rights.

Stupid police should learn the law, however when its about EGO things tend to go wrong

Now pay attention to the fact this moron is paid $49k a year
Do You Have to Carry ID With You at All Times?

Kyle Hammond is facing obstruction of justice charges for making a video recording of the outside of the Richmand FBI headquarters had his case thrown out this Monday.

The judge assigned to the case dismissed the charges against Kyle Hammond, 27, just minutes after the trial started.

Hammond’s arrest, which was recorded and uploaded to YouTube, where it has since gone viral. During the video, Hammond was placed in handcuffs for failing to produce identification documents. It was later confirmed that Hammond had not violated any law.

Hello this is America, we have the right to be silent, to video tape and disobey problem officers such as Officer John L. Hughson

Virginia Man Arrested For Not Showing His Papers