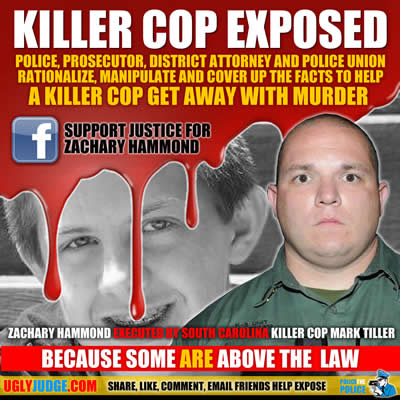 After the parents of an unarmed teenager killed by officer Mark Tiller held a news conference on the lack of charges in the case, a South Carolina state representative spoke to WYFF News 4’s Mandy Gaither and shared his anger over Zach Hammond’s death.

Paul and Angie Hammond and their attorneys, Eric Bland and Ronnie Richter, held a news conference in downtown Greenville Thursday at 10:30 a.m. to talk about the death of their 19-year-old son, the lack of charges against Seneca police Lt. Mark Tiller and information in the case that was released by Solicitor Crissy Adams.

Although the South Carolina police officer who shot and killed an unarmed 19-year-old during a low-level drug sting gone wrong this summer won’t face charges, it’s “obvious” that he was murdered, according to the attorney for the young man’s family.

Zachary Hammond, who is white, and a female friend, Tori Morton, were in a Hardee’s parking lot on their first date when Lieutenant Mark Tiller pulled up behind their car, his lights flashing. Earlier, Morton had mistakenly sent a text to a State Highway Patrol trooper arranging a drug deal, the Post and Courier reported.

The dashcam footage of the incident was released Tuesday. In it, you can see Tiller approach the car. You can hear him tell those inside to get out of the car and curse at them. Within seconds, Zachary’s car is out of view, and that is the moment he was killed by Tiller.