Police Unions the Evil Behind Them 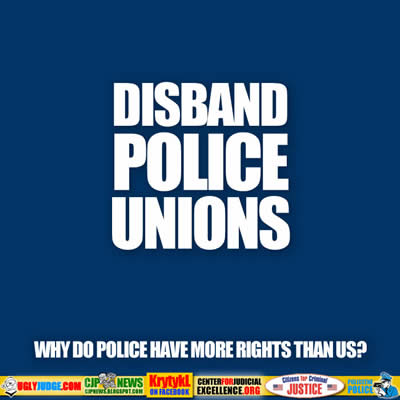 Police Unions the Evil Behind Them

Americans must be informed at how Police Unions have twisted the law, truth and actual situation in regards to safe Policing in America today. They’ve removed our rights and replaced them with their own Police Bill of Rights. Was it that easy? Certainly with the courts in your back pocket and the unfair relationship between judges and police it was easier than one thinks.

Now after all these bills and laws which many have been quietly passed behind our backs people are being abused, murdered and raped by criminals who hide behind a fancy uniform and a shinny badge. The fact is police are under trained (six months or less) and over paid. Poor attentance means they’ve even lowered their standards so even worse candidates are hired. With the decades old problem of people complaining and exposing a bad cop the reports and complaints go unheard or seen. Many are even deleted when police themselves fail to investigate on time.

Here is a sample of the common provisions in these measures, which vary from state to state:

“It is far from a fanciful concern that the police will take advantage of all the extra due process they get under Maryland law to concoct an alternative version of events.”

When I was a prosecutor, nothing made a police officer angrier than being treated like a suspect. If we prosecutors asked the officer too many questions about how he obtained evidence or if we questioned his credibility in any way, he would catch an attitude. “Don’t treat me like a suspect” communicated that officer’s belief that he didn’t have to follow the same rules as the citizens he serves and protects. The Law Enforcement Officers Bill of Rights makes that double standard the law in 14 states.

Here is one of the many reasons that the city of Baltimore erupted in flames this week. When police officers first encountered Freddie Gray he was alive and walking. After a week in their custody, he was dead with a severed spine and a crushed voice box. And the mayor and the police chief say they have no idea how that happened.

Say that the police suspect a civilian of a horrible crime, like killing a man by breaking his spine. Within the crucial first 24 hours after the crime, the cops would put the man in a room, read him his Miranda warnings and then go to work. They would try to get him to talk, perhaps by lying to him, or threatening him, or by wearing him down. Maybe it works, maybe it doesn’t. But any cop worth her salt would try because, hell, it’s homicide investigation.

Unless, thanks to the Maryland Law Enforcement Officers Bill of Rights, it’s a homicide investigation of a police officer. Lucky for them, those cops don’t get treated like some suspect. Among other things, they get 10 days before they have to say a mumbling word.

It is far from a fanciful concern that the police will take advantage of all the extra due process they get under Maryland law to concoct an alternative version of events. Indeed, in the Freddie Gray case, they have already done so. The police report filed the day Gray was arrested states that he was taken into custody “without force of incident.” That is a big lie, the cell phone videos of the arrest subsequently revealed. It will be interesting to see what else got added to the story in the nine other days before those police officers were required to talk to investigators.

It’s strange that a law that thwarts transparency and accountability is called a “bill of rights.” The Law Enforcement Officers Bill of Rights has the same relationship to a real bill of rights that the Patriot Act has to a real patriot. The real Bill of Rights — the one enshrined in the United States Constitution — actually limits the power of government, including the police.

When I heard President Obama use the word “thugs” in talking about the situation in Baltimore, I did not know if he meant the people participating in the urban insurrection or the police who arrested Freddie Grey. Here is what I do know: In a democracy an accused “thug” should not get more rights just because he wears a badge and a gun. Full Story

POLICE UNIONS AND HOW THEY HELP KILLER COPS AVOID ACCOUNTABILITY

Yet reform is what they need. There are many similarities between police officers and teachers: Both belong to professions filled with heroic and dedicated public servants, and both enjoy deep reservoirs of public sympathy as a result. But in both professions, unions have consistently exploited that sympathy to protect failed policies and incompetent personnel.