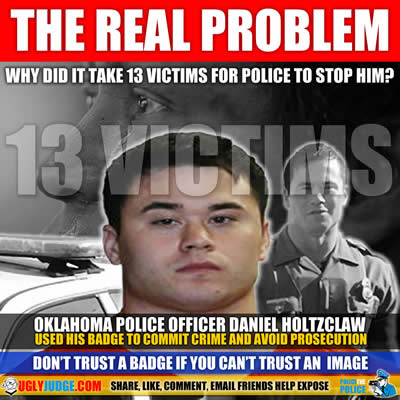 The alleged victims  range in age from 17 to 57 are all black. They have accused Holtzclaw of fondling their breasts, forcing oral sex, and in two cases, rape. Some told investigators that Holtzclaw implied that he would help them with their cases if they performed sexual acts.

Holtzclaw has pleaded not guilty to all charges against him.

The real problem America faces with police is if a criminal can get a badge then you can’t trust anyone with a badge. The wrong people get hired at an alarming rate. Bullies, undocumented criminals, sociopaths, psychopaths, control freaks, mentally challenged, insecure people and egotistical problem people get hired everyday. Remember many candidates are hired because of a relative within the department which means all testing is ignored. Tests for police candidates are inadequate at best and allow the worst people to get authority over our children and loved ones.

Lets not forget giving them deadly force and the excuse “I feared for my life”. Once hired, immunity and a biased, broken, unfair court system refuses to prosecute them. Not only does this problem exist with Police but with Judges and government folk who work in positions of authority and power. Sociopaths, psychopaths, control freaks and insecure people are the worst people to hire yet their drawn to such positions of power and control. Their great liars and charmers who’ll say anything people want to hear to get hired.

Fact some police commit crimes, murder and abuse and are never caught, prosecuted or held accountable. All over America victims are reporting dishonesty, crime, violence and abuse by police and nothing is done. Reports are railroaded, ignored or prosecutors and investigators don’t do their jobs. Fact is when police commit the same crimes the public does they’re not polygraphed, drug tested or forced to endured endless hours of interview pressure to commit to the crimes. Instead unions and management reward obvious dishonesty and murder with paid leave, promotions and time to make up stories about what happened. The police officers bill of rights ignores the victims constitutional rights and helps a bad cop get away with crime and go on committing more crime.

When you’re above the law like police and judges you have no fear of punishment thus you’re more apt to break the law and commit crime. When police commonly break basic laws and use their job as an excuse none of us can truly respect law when it’s not applied to all of us equally. Illegal parking, speeding, failure to signal, needlessly blocking traffic are just a few things everyone has witnessed that police commonly do on the job. When you get down to it, police commit crimes why “because they can” and they know no one will do anything about it.

How often are people victimized by police and the courts when they report an officer or are killed and have their characters destroyed? It’s common that police and courts will leak confidential info, criminal records and even exaggerated, manipulated stories about victims. All done to minimize and destroy the character of anyone going against police or the courts. Remember the old tactic “Don’t like the message, kill the messenger”.  Lets face it when exposed and caught doing wrong police and courts don’t play fair or by the rules.

The solution is taking away absolute power from police and judges and giving it back to the citizens in the form of oversight committees. Citizen committees then have the power to investigate, fire, take away pensions and rule for proper punishment. When we start treating police and courts like any other business we’ll see change. The tax payer ultimately is the one in charge and deserves to decide how their money is spent. You’d expect our government to protect us and to intervene when police or courts do wrong. However it’s been proven by thousands of victims who file reports every year with the Department of Justice that government fails us and most of the time ignores our cries for justice. At best they pass the buck and only act when in their best interests.

Oklahoma police officer Daniel Holtzclaw is proof police hire the wrong people. On top of that it’s proof that as a police officer victims find it nearly impossible to report them. We’ve gotten reports that victims who go to police to report officers are threatened, abused, terrorized and ignored. This is not some of the time but most of the time. Ever try and report a police officer or judge for crimes or abuse?

The worst is how people will still side with this obvious criminal. They refuse to accept that perhaps the wrong person got hired and obtained a badge which he used to abuse, rape and commit crime.

More on police officer Daniel Holtzclaw and his 13 victims

A Victim stood at a news conference on Friday and described her horror and defenselessness as Oklahoma City police officer Daniel Holtzclaw sexually assaulted her in her car during a traffic stop while on duty.

“I was so afraid, and I was out there so helpless,” she said. “God’s will, he let me live. He let me live and tell this story like a lot of victims are not able to do.”

Officer Daniel Holtzclaw, no longer a police officer, was convicted on 18 of 36 counts of rape and other charges involving attacks on 13 black women.

The victim’s statement was met by applause from a crowd on the steps of the Oklahoma County District Courthouse. Her story helped prompt the investigation that led to the case against officer Daniel Holtzclaw because she was what prosecutors described as his mistake: a grandmother, who — unlike Officer Holtzclaw’s other victims — did not have a criminal record or other troubles with the law.