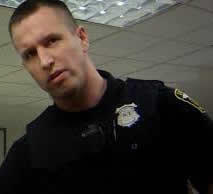 Officer Michael Amiott
Yet another abusive cop is investigated, it needs to be accepted their hiring the worng people for the job and when exposed bullies and thungs like this must be removed from working in law enforcement forever,

Euclid Mayor Kristen Holzheimer Gail has suspended Police Officer Michael Amiott an additional 30 days without pay in relation to a controversial arrest back on Aug. 12.

In a written statement, Holzheimer Gail also announced “a full review of Officer MichaelAmiott’s prior conduct as a Euclid Police Officer to determine Officer Michael Amiott’s suitability to return to employ ment by the City of Euclid.” Amiott was previously accused of using excessive force on a city worker in July, and was forced to resign after less than one year with the Mentor Police Dept., where he “struggled to meet department standards.”

In addition to his suspension, Officer Michael Amiott was also removed from the department SWAT team and ordered to undergo extensive training.