The Ultimate Scumbag Sgt. Aaron Goodwin of Portsmouth New Hampshire stooped to greed and dishonesty, taking advantage of his uniform, badge and authority. He did this almost all on city time while on duty. Pretending to protect the weak, defenseless and helpless this dishonorable lowlife is an example of who we hire as public servants today 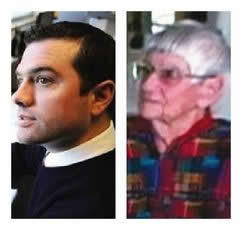 The story recently got deeper and more disgusting exposing how a police officer used his authority and tax payer dollar paid to influence a woman with Dementia.

When Geraldine Webber, who was then 91 years old, drew up her will in 2009, she left her disabled grandson, Brett Webber, $25,000. But when the Portsmouth, N.H., woman died last December, she had a whole new will.

Brett was not named in the new will. Nor were several others who were included in the 2009 version endorsed by the elderly woman. Instead, most of her $1.8 million estate went to a local police officer, Sgt. Aaron Goodwin, who had befriended the woman, helping her get through a dispute with the estate lawyer who drew up her 2009 will.