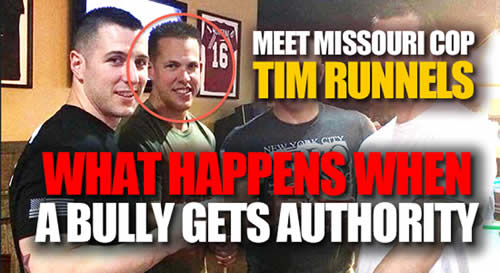 Officer Timothy Runnels
Is a good example how bullies and problem people get hired and are given authority and deadly force. Officer Timothy Runnels should be spending the rest of his life in prison behind bars. Who knows how many other victims are out there who have suffered at the hands of this monster. It should open the eyes of every American how bad it’s gotten. These are not isolated case instead dailty occurances that were only exposed because of recorded video which proves we must demand all police are recorded.

THE SENTENCING HEARING began with a surprise. Officer Timothy Runnels, a 32-year-old former Independence, Missouri, police officer Timothy Runnels , sat at a large, rectangular defense table inside Courtroom 8B at the Charles Evans Whittaker Federal Courthouse in downtown Kansas City, Missouri, late last month. Officer Timothy Runnels  was waiting to learn his fate after pleading guilty to a federal crime he committed almost two years ago, on September 14, 2014. Judge Dean Whipple had not yet watched the government’s key piece of evidence — a dashboard video — because he wanted to do so with attorneys present to make arguments. Today the video, which had never been played in any public setting, would be played in open court. Even the victim, 18-year-old Bryce Masters, had seen it only once.

As the video opens we see a gray Pontiac enter the frame, and Bryce’s dad, Matt, put his hand on his son’s knee. His mom, Stacy, folded her arms, clutching a tissue. Tears began to form in both his parents’ eyes, anticipating what everyone else in the room was about to see. Unfazed, Bryce leaned his 6-foot-1-inch frame forward, his eyes focused on the makeshift projector. He knew this piece of evidence absolved him of any wrongdoing.

Officer Timothy Runnels faced a dire sentence that day — up to 10 years in federal prison. The catalyst for the crime was the 23-second Taser deployment straight into Bryce’s chest. That’s what caused him to go into cardiac arrest. Assistant U.S. Attorney David M. Ketchmark argued that the length of time that Officer Timothy Runnels held down the Taser’s trigger was an aggravating factor. One pull on the trigger sent electricity shooting out for five seconds; Officer Timothy Runnels had held it down the equivalent of four pulls. Even so, the prosecution agreed that the initial Taser use was reasonable and within common police practice. Officer Timothy Runnels’s crime, depriving a minor of his civil rights, occurred when he dropped the dying 17-year-old boy on his face. READ FULL STORY

Victim story A SHOT TO THE HEART 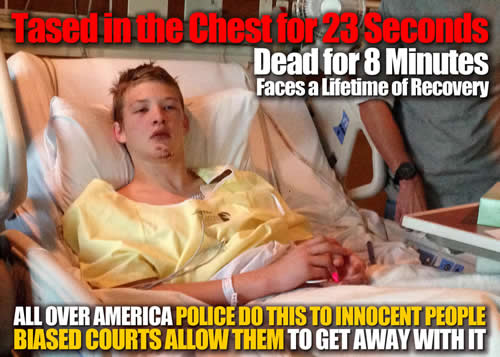