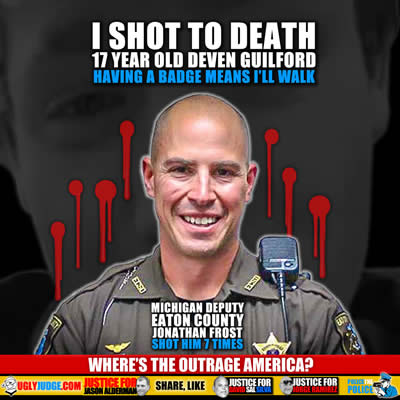 You would think an adult would handle a teenage another way besides a taser or shooting him seven times? The point is this officer made a bad decision and even admitted his head lights were so bright other motorists thought he had his high beams on. Yet due to ego Sgt. Jonathan Frost forced a situation that never should have taken place. The result was a teenager was murdered for what? What was so important that Sgt’ Frost had to pull this child over?

“The acts of FROST in stopping, demanding identification, ordering GUILFORD from the car, arresting him as if he were a felon, tasing him and then killing him, were all separate and distinct illegal and unreasonable seizures under the 4th Amendment,” the suit states.

The family of a Michigan teen who flashed a car’s brights at a sheriff sergeant’s SUV and wound up dead filed a wrongful death lawsuit Wednesday.

Guilford flashed the headlights of the car he was driving at the sheriff department’s new SUV as Frost drove it the opposite way on State Highway 43, according to the complaint. The Ford Explorer had “improperly bright or misaimed headlights” and Frost had stopped two other drivers for flashing their lights at him that night, the lawsuit said.

What may have been misguiding Guilford, in my mind, is a misunderstanding from the ongoing discussion about citizen rights in police encounters. The national debate over excessive force by police has focused on cases of black citizens, though Guilford and another man killed in a recent police shooting in Eaton County were white. Indeed, the youth’s girlfriend and family said the teen had been watching videos and was interested in civilian-police encounters.

Guilford also asked the officer for his badge number, which is not printed on Eaton County deputy badges. As a longtime reporter, I’ve driven lonely roads at night. Making sure you are stopped by a legitimate officer is just common sense for your personal safety.

In this case, the marked car and uniform would have been enough for me, but Guilford persisted in seeing the badge number. What if the officer had simply explained that the number isn’t on his badge or told him what it is? Instead, he told the teen that he didn’t have to show it to him, and you can feel the tension rise in the exchanges.