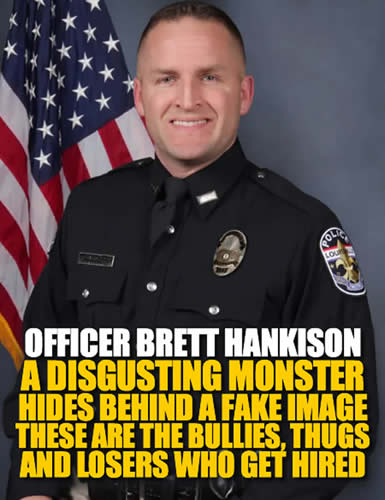 Louisville Kentucky Police Officer Brett Hankison murdered Breonna Taylor, this is typical out of control police abuse and murder. Judges who side with these monsters must also be held personally liable because judges enable these thugs, bullies and losers to go on ego driven psychopathic murder missions. What kind of COWARD shoots without knowing into a home? We should all be allowed to shoot 10 rounds into Brett Hankison’s home when he and his family are at home. That is justice not some lunatic, trigger happy beast like Louisville Officer Brett Hankison hiding behind his big gun, tin meaning less badge, clown suit and impunity.

The police chief said Mr. Hankison “wantonly and blindly” fired 10 rounds into Ms. Taylor’s apartment on the night she was killed.

The Louisville Metro Police Department on Tuesday fired one of the three officers involved in the fatal shooting of Breonna Taylor, the most significant action yet in a case that has drawn public outrage for the killing and the fact that no criminal charges have been filed.

In a termination letter posted to the department’s Twitter account, Chief Robert Schroeder accused the former officer, Brett Hankison, of violating its policy on the use of deadly force, saying he “wantonly and blindly” fired 10 shots into Ms. Taylor’s apartment on March 13.

After Ms. Taylor’s boyfriend shot one officer in the leg as they broke down her door during a drug raid, the officers returned fire and killed Ms. Taylor, 26.

Fact is this POS has a history of abuse and problems and via dishonest lawyers, corrupt police unions and spineless judges these problem officers are allowed to keep on abusing and killing with the support of government and courts.