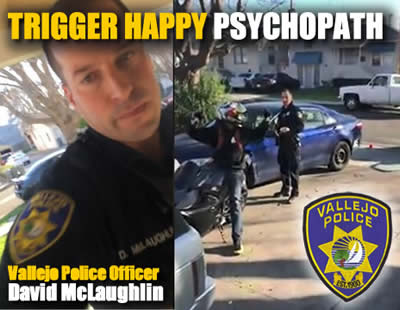 Meet Vallejo officer David McLaughlin a trigger happy psychopath cop who has no right to be a peace officer or worse have deadly force. This monster and problem person with huge ego and attitude issues is the exact reason why police are not trusted today. It is because Vallejo Police department keeps him employed as their poster boy of problem, abusive and immoral cops that the public loses respect and faith in the entire department.

BULLY ALERT, this is a typical elementary school loser who was the school bully who found his way into law enforcement and now bullies the public with impunity.

Note that this cowardly piece of garbage has a history of pulling deadly force and yet remains employed. There are several videos and stories below documenting this mentally unstable beast. He has no business being in law enforcement.

“Internal affairs investigators have already contacted one of the subjects in the video together for their information. The entire incident Was captured on the police officers body camera and will be reviewed in connection with this investigation. Upon completion of the investigation, the chief will thoroughly review all the facts and make the final determination.”

A U.S. Marine veteran and filmmaker says he was assaulted by a Vallejo police officer and suffered a concussion just for filming the officer from his front porch on Jan. 22.

Adrian Burrell, 28, posted video of the encounter to Facebook this morning and provided it to Bay City News. He has retained civil rights attorney John Burris, who called the case “egregious” and said the officer’s use of force was “unnecessary and unreasonable.”

In an interview, Burrell said that he was relaxing in his home at about 3:15 p.m. that day when he saw his cousin outside on his motorcycle with his hands up. Vallejo police Officer David McLaughlin was crouched behind the door of his patrol car, pointing his gun at Burrell’s cousin.

Burrell stepped outside onto his home’s porch on Byron Street. He said his cousin was wearing a motorcycle helmet and couldn’t hear the officer, and walked toward McLaughlin, saying, “Hey he can’t hear you, he has his helmet on,” according to Burrell.

McLaughlin yelled at Burrell to go back in the house.

“This is concerning I better film this,” Burrell thought.

So Burrell, still standing on his front porch, took out his phone and began recording the incident. In the video, McLaughlin, with his gun drawn, says to Burrell’s cousin, “Why you taking off like that?” twice, then looks at Burrell, who is on his porch, and says, “Get back!”

Burrell says no. McLaughlin says “get back” again, and again Burrell refuses.

Then McLaughlin says to the man on the motorcycle, “Keep your hands where I can see them, keep your hands right up,” holsters his weapon and walks toward Burrell.

“Stop resisting me or I’m going to put you on the ground,” McLaughlin says.

“I’m not resisting. Put me on the ground,” Burrell says.

Eventually the camera swings around and lands on the ground.

Burrell said that McLaughlin mashed his face into a wall and swung him into a pole. He applied the handcuffs so tight it broke the skin on his right hand and left his fingers numb.

Eventually, Burrell asked McLaughlin if he could be handcuffed in front, as he had injuries from being in the military. McLaughlin then told him, “Oh you’re a vet? You sure weren’t acting like one,” according to
Burrell.

But Burrell says McLaughlin told him that he would let him go because he was a veteran, thanked him for his service and let him out of the car.

Burrell said he then went to the hospital and was diagnosed with a concussion. He is still seeking treatment and says his fingers remain numb from the handcuffs.

Burrell said he was in the U.S. Marine Corps for four years before he was honorably discharged in 2012. He now works as a filmmaker.