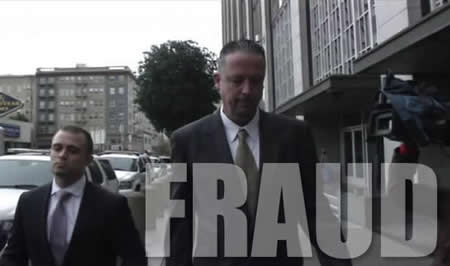 Officer Edmond Robles is an example of how dishonest people can become Police officers in America.

Officer Ian Furminger, 47, of Pleasant Hill, was convicted in December of two counts of wire fraud and one count each of conspiracy against civil rights and conspiracy to commit theft concerning a federally funded program for illegal searches and seizures at a single-room occupancy hotel in 2009 and 2010.

Furminger resigned from the department in December after his conviction.
Which is odd because he should have been fired but this common practice allows this scumbag to get hired by another agency. Thus his record does not show he was terminated.

“It’s very disturbing for the court to have to sentence an individual charged with enforcing the law,” Breyer said. “It’s a day of shame for law enforcement, for all of us who are involved in the criminal justice system.”

A co-defendant in the case, Officer Edmond Robles, 47, was convicted of five counts and is awaiting sentencing. Another officer, Reynaldo Vargas, pleaded guilty to four counts and became the prosecution’s chief witness in the case.

The officers took cash, electronic devices and gift cards without booking the items into evidence or including them in police reports in searches at the Henry Hotel on Sixth Street.