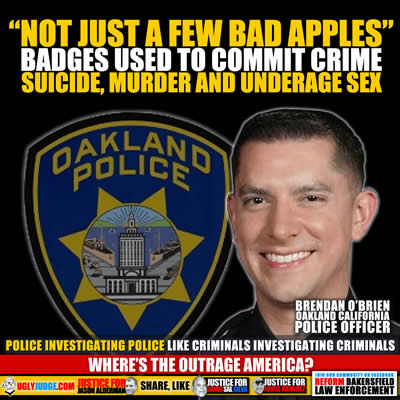 Oakland Police Officer Brendan O’Brien committed suicide in September, 2015 a year after his wife’s death, which at the time was ruled a suicide. O’Brien left a note after his suicide that led to an initial internal affairs investigation. [2]

A subsequent investigation ordered by a federal judge led to many Oakland police officers admitting they had lied during the first internal affairs investigation about their relationships with Celeste Guap. One officer also admitted to knowing she was underage when he had sex with her. Over a dozen officers are alleged to have had affairs with Celeste Guap while she was underage.

O’Brien’s wife, Irma Huerta Lopez, died on June 16, 2014. Her death was ruled a suicide, but was briefly classified by homicide detectives as a potential criminal investigation.  Her family believes that O’Brien shot her and Huerta that the police ignored them.

“Not just a few bad apples” The story exposes the fact that other departments were involved. Using their badges and status to escape prosecution and help cover up their crimes.

The Oakland police sex scandal is ricocheting across the East Bay as the woman at the center of it now says she had sex with two dozen current and former officers from five departments — from Richmond to Livermore. And sources say that Oakland police’s botched handling of the investigation is what precipitated Chief Sean Whent’s sudden departure this week at the behest of the federal monitor overseeing the department.