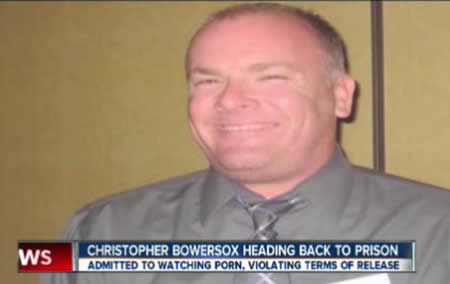 Bakersfield Police officer Christopher Bowersox
It’s too easy to hide behind an image like a badge. For decades they’ve been hiring below standard officers which some end up being criminals (without a record) and mentally ill persons who have no business with authority or deadly force.

According to court documents, Bowersox came to the attention of law enforcement after an individual involved in trafficking child pornography in Florida was arrested. That individual had engaged in numerous graphic chat communications with Bowersox. When Bakersfield Police Department detectives executed a search warrant at Bowersox’s residence, they located a computer and several digital storage devices that contained images of child pornography. Many of the images depicted prepubescent minors, and several depicted violence or sadistic or masochistic conduct.

Bowersox is scheduled to be sentenced by Senior United States District Judge Anthony W. Ishii on May 6, 2013. Bowersox faces a maximum sentence of 10 years in prison, a $250,000 fine, and a lifetime term of supervised release. The actual sentence, however, will be determined at the discretion of the court after consideration of any applicable statutory sentencing factors and the Federal Sentencing Guidelines, which take into account a number of variables.

This case is the result of an investigation by the Federal Bureau of Investigation and the Bakersfield Police Department, with assistance from the Kern County Sheriff’s Office. Bowersox has been in federal custody since February 12, 2010, and he has been ordered detained as a flight risk and danger to the community. Assistant United States Attorney David Gappa is prosecuting the case. Full Story

Instead, a small but slowly growing number of families of people killed by officers in recent years now gather each Friday at dusk outside Bakersfield police headquarters, holding placards that invite drivers passing along Truxtun Avenue to honk their horns in support.

Not many of them oblige.

Scant local concern has been roused even as a string of BPD officers have been arrested in recent years. After the 2010 arrest relating to his vehicle crash, Stringer – the officer accused of manipulating De La Rosa’s body – was able to plead no contest to a charge of misdemeanour reckless driving and have charges of driving under the influence and hit-and-run dismissed. Police chiefs said Stringer stopped working at the department after his handling of De La Rosa’s body came to light, but refused to say whether he was fired. Stringer could not be reached for comment. His attorney did not return several requests.

A year after Stringer’s crash, his colleague officer Scott Drewry was acquitted of throwing a rock through the window of a business linked to a family dispute while on duty. In 2012, officer Albert Smith was jailed after not disputing charges of having sex with prostitutes, allegedly in his patrol car. In 2013, Detective Christopher Bowersox was sentenced to up to 10 years in prison after pleading guilty to possessing images of violent sexual abuse of children. FULL STORY