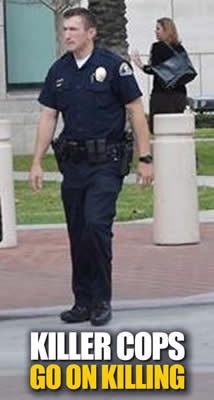 Officer Nick Bennallack
Diaz was unarmed and not wanted for any crime when he exercised his constitutional rights to move away from Anaheim officers on July 21, 2012. Twenty seconds later, Officer Nick Bennallack decided without warning to kill Diaz with shots from a semi-automatic Glock that struck the young man’s buttock and back of the head. FULL STORY HERE

An Anaheim policeman who was named rookie of the year and whose name recently appeared on a charity fight card was identified Tuesday as the officer who fatally shot a man who police say ran when officers tried to apprehend him.

Officer Nick Bennallack was named in a civil lawsuit filed by the family of Manuel Diaz, 25, whose July 21 shooting, followed by another officer-involved fatal shooting the next day, ignited days of protests in Anaheim.

Officer Nick Bennallack returned to duty within two weeks of the shooting, after psychological examinations and after officials reviewed preliminary facts from two investigations.

Police initially refused to identify the officers involved in the two shootings, saying they had received death threats. In September, the Register identified Investigator Kelly Phillips as the officer involved in the second shooting, which killed Joel Acevedo.

Unarmed Manuel Diaz was shot fatally twice, in the butt and back of the head, while fleeing from his shooter, Anaheim Police Officer Nick Bennallack, on Anna Drive in July 2012.  And this police killing, along with the killing the next day of Joel Acevedo as well as several other questionable police killings that year, led to a long hot 2012 summer of riots, protests, and eventually some micro-reforms.

Well, the good news THIS week is that the Supremes, having read the 9th Circuit’s published decision and found it fair and sound, sent Moses Johnson back to the woodshed – Manuel’s mother DOES get another civil rights trial, whch will take place this October. What does Genevieve want?  She was clear and unhesitant at Tuesday’s press conference in front of Anaheim City Hall – she wants Officer Nick “Backshot” Bennallack off the force and behind bars, “like any other murderer.”  Because, you know, what better way to make sure this stops happening with such regularity?

This is an important decision that should resonate throughout the nation – no longer can the defenders of rogue policemen manipulate juries and judges with pointless dirty details from a victim’s past, while hiding the cop’s misdeeds behind a blue veil of secrecy – an asymmetry that had long been a mainstay of our system of injustice.  And let’s give a big backhanded slap to the power structure of Anaheim – whose ruthlessness and greed have now accidentally led to three great legal outcomes I can think of – the demise of California’s Enterprise Zones precipitated by the greed and cheating of Disney and the Honda Center; civil (asset) forfeiture severely curtailed partly due to Anaheim’s piggish attempts to swindle Tony Jalali of his $1.5 million office building;  and now this.

Congratulations and good luck to Genevieve Huizar and her legal team – except in the video below her lawyer Humberto Guizar is wrong when he tells a reporter that the chant “NO JUSTICE, NO PEACE” originated with Black Lives Matter.  Uh, no, Humberto.  People’ve been saying “NO JUSTICE NO PEACE” as long as I can remember! FULL STORY HERE

LAWYERS FOR POLICE MANIPULATE TRUTH. STOP EVIDENCE OF A BAD COP AND ALLOW EVIDENCE DESTROY THE CHARACTER OF THE VICTIMS
The defense of Bennallack by Steven Rothans, a Los Angeles-based lawyer who specializes in defending law enforcement agencies and cops in police brutality cases, came down to this: because the officer could not tell whether Diaz had a gun on him (he didn’t), it must be assumed the perp had one and the threat must be eliminated–a threat that did not exist, mind you.

With vigor, Rothans also painted Diaz as Anaheim’s Public Enemy No. 1, which brings us to the appeal of the verdict Galipo vowed to file. He blames U.S. District Court Judge James Selna for allowing incriminating evidence that improperly influenced jurors against the dead man.

“He let in evidence that the officer was unaware of at the time,” Galipo told City News Service of the veteran judge,”that the decedent had methamphetamine in his system and was a member of a gang, and there were photographs found on the decedent’s phone with the decedent posing with a gun in his hand.”

Galipo continued, “I think once the jury was looking at all that negative evidence, even though the shooting was unjustified, they gave the officer the benefit of a doubt.”    The plaintiff attorney added he was “disappointed” in the verdict “but not surprised.”