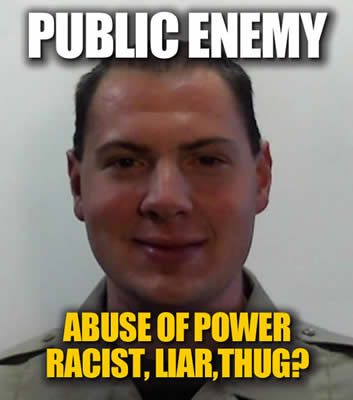 When racist get authority and impunity to abuse the public and people’s rights
Deputy Eli Max Parker,  Arizona is a perfect example of the WRONG person being hired and given authority, deadly force and impunity. These types of thugs, and abusers then abuse the legal system to get rehired to continue their abuse and terror.

Arizona couple is coming forward with more allegations against a La Paz County deputy who made headlines for pulling over a black man and questioning him repeatedly because of a hanging air freshener.

Larry and Janet Briggs said over the Labor Day weekend Deputy Eli Max violated their rights during an hour-long traffic stop by repeatedly claiming they were under the influence of alcohol and drugs despite negative field sobriety tests and unlawfully detained them for a dog search.

“I remember his parting words were, ‘I know you’re under the influence of something I just can’t provide it,” Larry Briggs said in an interview. “I was like how many times can you be wrong about something in the same day.”