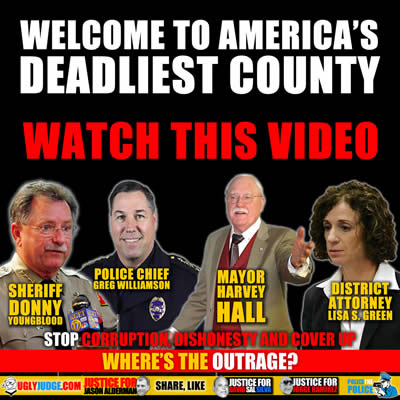 The Guardian did a documentary and news story on Police killings in America. Something most American media shy’s away from. What the government of the United States is not telling you and the US media does not want to cover

Anyone who tells you police don’t need:
“Citizen’s Review of Officer involved Shootings”
Is part of the problem and why dishonest officers get away with murder
in America today.

The reason for this is the reverse of what police will tell you. They state you can’t be objective. The fact is they can’t be objective either. It’s almost always about their friends, their co-worker and their job so how can they be objective.
So don’t believe the propaganda and lies that police management tells you.

The above ” is stated by a Former Police Officer” not just someone without a police background.

A FIVE PART SERIES
Part ONE  Shootings in the City
Part TWO The County: where deputies dole out rough justice
Part THREE The Price of Silence
Part FOUR Partners in Crime
Part FIVE A fight for Answers

The County: the story of America’s deadliest police
Police in Kern County, California, have killed more people per capita than in any other American county in 2015. The Guardian examines how, with little oversight, officers here became the country’s most lethal

The County: where deputies dole out rough justice
How the brutal tactics of officers in American law enforcement’s deadliest county have ended lives, cost the public millions, and prompted claims of a police force out of control

The County: sexual assault and the price of silence
How law enforcement officers in Kern County, California, secretly tried to ‘buy off’ victims in sexual misconduct cases against the men sworn to protect them

The County: partners in crime
How the officers of American law enforcement’s deadliest county plan to continue policing themselves

The County: what happens after police kill someone you love?
When someone dies after an encounter with law enforcement, he leaves behind parents and children, loss and confusion. What’s to be done when those people sworn to protect you are the same people who pull the trigger?

In Kern County, California, officer-involved deaths have been more common than in any other US county this year. Meet the families across this rural swath of America calling for justice in a place where law enforcement consistently clears itself of wrongdoing.