Police committing Crimes Out of control Police Steal, Lie, Cheat and Murder because they can 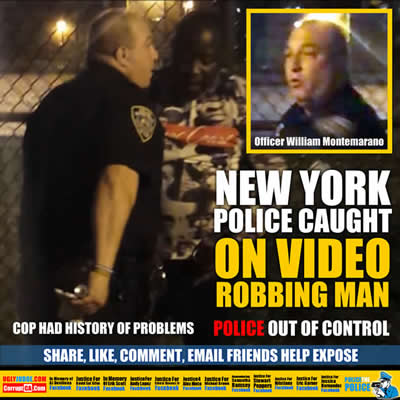 Police committing Crimes Out of control
Meet Brooklyn New York Police Officer William Montemarano, who has a history of abuse, breaking the law and dishonesty. Yet he was allowed to continue his crimes and dishonest by a broken system where judges and lawyers who should prosecute him, don’t because they depend and work with these officers. Police committing Crimes is becoming common, most of the time it goes unreported. Because our courts believe police not the public, however with video evidence the tables are turning.

The American taxpayer is being lied to by government when they claim to investigate and hold a police officer  accountable. The fact is most dishonest cops go out and do it again and many do worse crimes including murder. Police are in fact above the law, who do they answer to? Without video evidence courts often take the word of a dishonest cop with a history of crimes over honest, hard working tax payers. This is how they get away with it. Over 1000 people were shot to death, EXECUTED by police officers last year. Many unarmed, innocent and no threat, yet all a dishonest cop needs to do is say the magic words “I feared for my life”. Then that officers friends or co-workers do a biased investigation and claim it was a justified execution. Even if other officers who were at the scene did not feel they needed to draw their weapons or shoot.

The fact is Police from the first day they’re hired begin to find they can break the law because they’re in fact the law. This blatant abuse of power should and must be dealt with. Police must be held to higher standards, we depend on honesty, integrity and law. There should not be second chances, no jail time, probation or paid leave for officers who commit any crime period.

Like the public, when police arrest you, you must prove your innocent, not innocent till proven guilty as government claims. The public does not get paid leave, high priced tax paid lawyers and big union dollars to manipulate and influence your innocence.  If you’re accused of a crime you’ll be in a jail cell right away, no bail you’ll remain locked up. As opposed to Police who never see a day in jail. You’ll lose your home and job in the process. We must demand equality in America, even for those we entrust to enforce law. This means Police, Judges, lawyers and government. Police committing Crimes Out of control.

The NYPD cop Officer William Montemarano accused by a Brooklyn man of stealing $1,300 from him during a stop-and-frisk was sued in 2013 for beating a suspect and fracturing his larynx.

Officer William Montemarano and his partner Officer Hugh Herbert were accused in the federal lawsuit of beating plaintiff Tyree Gordon with nightsticks and kicking him in the throat. Gordon claims he was falsely arrested on drug charges and a grand jury declined to indict him. The case was settled for $25,000 but there was no admission of wrongdoing.

Meanwhile, Lamard Joye’s lawyer, Robert Marinelli, released a second video Friday which he argued undercut the NYPD’s claim that his client was interfering with the arrest of a man outside the Surfside Gardens houses, which led to the confrontation with Montemarano.

Officer William Montemarano needs to steal See how much he earns

Video shows NYPD officer taking $1,300 from man, then pepper-spraying him