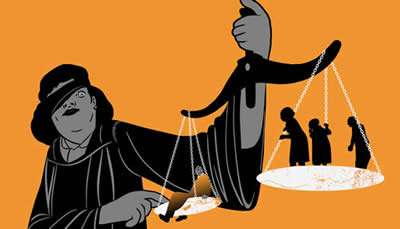 We are sending this timely special report that highlights one of the the reasons I have taken action with initiating the petition to impeach and remove Judge Anna Culley for her violation of federal and state laws.

Special Report: Thousands of U.S. judges who broke laws, oaths remained on the bench
With ‘judges judging judges,’ rogues on the bench have little to fear
More Reuters News Stories on Dishonorable Judges

It is noteworthy that the only NYS Supreme Court Judge to be impeached was George G. Barnard in 1872 even though the process of impeachment is outlined in the NYS Constitution, we have just stopped holding them accountable.

No one is above the law, not even judges…

A state judge is a state judicial officer, paid by the State to act impartially and lawfully. A judge is not the court. People v. Zajic,

My rights and my daughter’s civil rights were violated by government agents, namely Judge Anna (Seminerio) Culley and the NYPD. Because of their violations my daughter and I are still being victimized by the criminal actions of our abusers.

During the span of a year and nearly 25 points of contact with the NYPD, my daughter and I were denied the ability to report the felony crime of Grand Larceny, NYS penal code 155.40 and 155.42, that has been and is being committed against us by the perpatrators JOHN SHEHAS aka JOHN SHEHA, GUSTAS SHEHAS aka GUS SHEHA and his corporation TARATSA LLC.