Home Facebook New York Detective Patrick Cherry No Respect for the People or the law, Out of control Tax paid Public Servants

New York Detective Patrick Cherry No Respect for the People or the law, Out of control Tax paid Public Servants 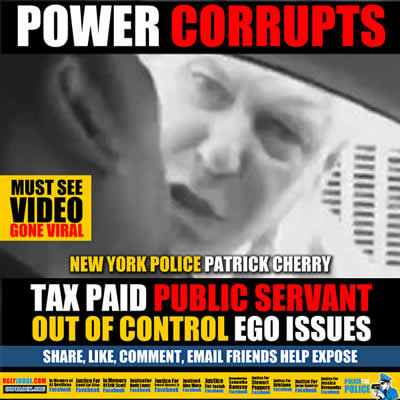 All over America people are subject to abuse and dis-respect such as what happened in this video. Police suffer from ego issues, have no respect for the public and are out of control. Unions and government are quick to come to the defense of a problem officer who deserves punishment not protection. Acts like this are signs of other problems and ultimately will lead to more violations. If we treated police like any other business, this officer would be dealt with and fired, speaking the way he did to the public who pay his salary. However police are rarely punished, held personally accountable and feel above our laws. What would happen if the tables were turned and someone spoke to this officer the same way?

Angry Detective Patrick Cherry was caught on camera belittling an Uber driver during a bias-fueled tirade in the West Village assigned to the Joint Terrorism Task Force.

The NYPD’s Internal Affairs Bureau is investigating the video, which shows Detective Patrick Cherry verbally attacking the Uber driver during a traffic stop and mocking his broken English. Note this officer was not in uniform or on traffic duty.

“I don’t know where you’re coming from, where you think you’re appropriate in doing that; that’s not the way it works. How long have you been in this country?” Detective Patrick Cherry, who is white, barked at the driver after pulling him over in an unmarked car with flashing lights, according to video of the encounter.

The car  Detective Patrick Cherry drives in the video does not belong to the NYPD, according to a police source.

Moments before slamming the car door and storming away, the hot-headed Cherry, who is based out of Federal Plaza in Manhattan, shouted at the driver: “I don’t know what f—ing planet you’re on right now!”

The detective repeatedly mocked the driver’s accent and pronunciation of English words, cursing at him. The driver responded calmly, saying “okay” during one point in Cherry’s tirade, the video shows. The driver’s ethnicity was not immediately clear.

The driver filed a complaint with police, which prompted the NYPD to assign the case to the Internal Affairs Bureau.

Your sharing this video and story help force police to do something because it’s their image at stake.