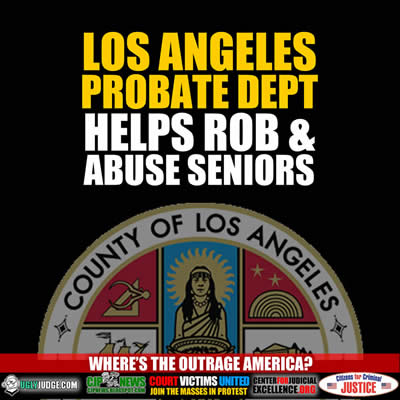 When Probate investigators don’t investigate seniors are abused and robbed by dishonest family. This happened to Gertrude Gettinger. The courts were given evidence of over $200k in stolen bank accounts by Gertrude’s own child Sylvia Schmidt and failed to investigate any crimes or abuse reported.
Read More

Corruption, abuse and even murder take place in our Los Angeles County Superior courts while police do nothing and government ignores reports and abuse

CORRUPTION WATCH-Passim is a legal word referring to something one finds throughout a system. For instance, raisins are passim in Pepperidge Farm Cinnamon Swirl Bread with frosting on top. Thousands of times each day, some poor soul is being screwed in some court in California. That does not mean that every case and every hearing is corrupt. And just as there are ingredients other than raisins in the Pepperidge Farm bread, not every judge is abusive, but all are complicit by silence.

No One Can Rely on Anything a Judge Writes

Most legal cases do not end with a jury verdict, but rather with a judge’s decision. Often the judge must write out the basis for his/her decision. A judge may end a meritorious case by lying and saying that the evidence is insufficient as a matter of law, knowing that the plaintiff is too poor to appeal. Lay people still cannot comprehend that lying and falsification of evidence by judges are every day occurrences in California courts.

The power to lie in order to harm innocent people is the cornerstone of California’s binding arbitration. In Moncharsh v. Heily & Blase, (1992) 3 Cal. 4th 1, the former Chief Justice of the California Supreme Court Malcolm Lucas wrote that binding arbitrations which were wrong on their face and worked a substantial injustice on the innocent party had to be enforced by the courts. Soon thereafter, Chief Juistice Lucas retired at full salary to become an arbitrator. Since he could readily lie, cheat, and twist a legal record into a poisonous pretzel, his services were very much in demand. What sort of legal system promotes injustice?

In her dissent in the Monchrash case, Associate Justice Kennard wrote that Chief Justice Lucas “never mentions the judiciary’s paramount obligation to do justice, and the rule it announces — which requires trial courts to endorse decisions known to be substantially unjust — is its very antithesis.”  Justice Kennard was naive to think that truth and justice had any place in California’s new judicial order after the elections of 1986 (which is another entire story). All she could do was document the destruction of our judicial system.

No one should believe anything any judge writes in any opinion. It might be true, it might be 100% false. No one in the public has any way to know. Take a look at Judge John Torribio in Norwalk. He invents facts and states that “Black is White” as an Undisputed Fact, and then his fellow miscreants on the Appellate Court say, “We must accept the Undisputed Facts as True.”

As shown in a recent CityWatcharticle, when there is an honest judge, his or her removal from the bench is likely. After Orange County Superior Court Judge Thomas Goethals exposed that the Orange County District Attorney and the Sheriffs’ Department were using lying jailhouse informants, he was off the bench and kicked upstairs. Yet, the bizarre Los Angeles County Judge Gregory Alarcon is still on the bench. Here’s another link to his Robing Room page.   In a judicial system where dishonesty is a virtue, one can expect Judge Alarcon to keep on going like the energizer bunny.

In the weird case of HERO v City of Los Angeles, case # B285553, Judge Torribio saw no connection between destroying rent-controlled housing and increasing homelessness. He claimed that because the City allowed the developer to evict all the poor people before it applied for permits for its boutique hotel in Hollywood, the hotel project did not cause the homelessness. (Maybe Judge Torribio is displeased with HERO’s attorney, but should the client suffer?) Why is this cretin still on the bench? He has proven to be an outright liar in the SaveHywd case and he claims the constitutional right to discriminate against Jews.

But is he worse than Judge Richard Fruin? Los Angeles City Council operates according to an extortion-bribery system whereby each member of the city council has sold his/her votes to each other member of the city council. In 2006, Penal Code § 86 criminalized vote trading. In December 2016, Judge Fruin, ruled that the City of Los Angeles is above the law. His legal word was “non-justiciable,” which means beyond the power of the courts. Thus, the criminal vote trading continues unabated.

The number one factor in Los Angeles’ huge increase in housing costs is the criminal vote trading system at City Hall. It allows each councilmember to make whatever corrupt deal he/she wishes with a developer with full knowledge that the project will receive unanimous City Hall approval. The by-product of this corruption is that the cost of all residential property escalates out of control.

When a developer knows for certain that he can buy any piece of residential property and then build whatever he wants, he will pay a huge premium for that property. The developer’s purchase price becomes part of the “comparables” by which the listing prices of other homes are set. A family, however, uses its home for living so it wants to pay the lower Living Space value. Unfortunately, so much LA property has been bought by developers, that families are forced to pay Developers value.  Then for thirty years, they must pay an outrageously high mortgage to Wall Street, and of course, their property taxes are two to three times higher than they should be. (BTW, what’s that thing where judges refi their homes without paying principle or interest?)

With corruption passim throughout the judicial system, Los Angeles will continue deteriorating. Since Gov. Jerry Brown refuses to take action against the Chief Justice, judicial corruption will escalate.