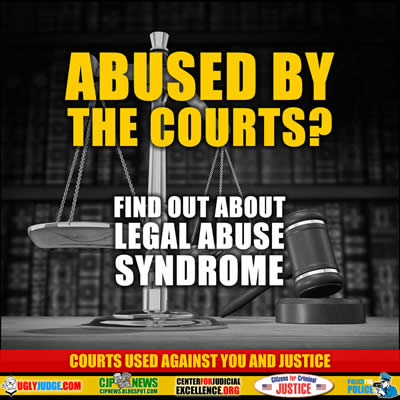 American Bar Association Journal summarized a new study finding that workplace bullying “is rampant at law firms, but many law firm leaders are reluctant to punish the offenders.”

Our courts are not about justice, if they were then having a lawyer would not cost $250+. Yet American’s are brain washed to think going to court is all about justice prevailing. The fact is money prevails and often the real criminals get away with crime and abuse because they’re better liars.

Going to court can affect your health and well being. If you don’t know about “Legal Abuse Syndrome” then educate yourself and use it to your advantage. It’s called PTSD.

It is odd to be a marriage and family therapist sitting in court with clients sorting out ways to assist them as they suffer from disabling stressors. Any observer can see stress eating away at the judges, the lawyers, the litigants, and those who come and go. No one is spared.

Over the years, observing in court and the adversarial process, I unearthed fresh roots leading directly to the causes of legal abuses and often attrition of my clients’ cases. Regularly, buried deep in the rings of the case, were slander, misinformation, and deception treated as facts. Once asserted on the official record, these pretexts became points and issues to be litigated before the original conflict could be heard. They were carefully honed to unfairly defeat my client in the justice system. Many of those were roots underlying invisible disabilities struggling to function in the esoteric realm of a courtroom. Many suffered from psychiatric injuries from war abroad or warring at home. The war did not give away to justice in the courtroom. Those who abuse power simply have a new battleground and gun their victims down with paper bullets and words designed to exclude, dehumanize, and annihilate their final hope and last dollar. Instead of justice, these persons with disabilities were impoverished and left with the scars of traumatic stress layered upon their already existing problems.

It is time to pause and look at the disabling conditions caused or made worse by abuses of power. As an advocate, I have the privilege of using the ADA to prevent:

I determined that SOMETIMES A PERSON NEEDS HELP FROM A SKILLED, SENSITIVE, COURAGEOUS individual to be by their side.  That realization set the trajectory of my life’s work.  I founded EAA, Equal Access Advocates, and, with the beautiful job of Senator Harkin and many legislators and activists, decided it was time to make the ADAAA a reality for persons with invisible disabilities who must face our judicial system.  The prestigious John Jay College of Criminal Justice took the bold step of certifying ADA advocates by using my syllabus for training.  The course is underway with the first certified advocates to graduate mid-September, 2016.

By now, I have a thorough picture of the support needed to offset the health and life’s consequences of extreme stressors from litigation.  An advocate, using a consistent standard of care carrying out the letter and intent of the ADAAA, attends court by the litigants side, in person or electronically.

Support may include some of the following, but basically, the idea is that the client, lawyer or litigant, not feel alone and excluded.  First, the advocate is trained in on-the-spot counseling/ coaching skills that can be administered in the halls of the courthouse.  I apply coaching when my client’s self-esteem has been attacked.  The usual bullet is the “c” word, “crazy,” but there are others.  Second, I help the attorney and the client stretch the budget to bring the case to closure (many attorney fees are wasted sorting out emotional and personal issues that are best served by the advocate or a therapist).  Third, I act as liaison with medical and legal professionals.  If something needs to be relayed to the disabled litigant, it is often easier and quicker to go through me.  I speak in court only to address ADA issues or cue the judge that an accommodation is to be triggered.  Advocates do not get involved in the legal case or are they activists while on a case.  And finally, I assess and design accommodations for each client.  This can be tricky with invisible disabilities, but compared to many physical disabilities, these accommodations are the cheapest and easiest for the courts.  The accommodations require mostly kindness, patience, and consideration, not architectural changes.  The entire matter is confidential.  Clients need not fear stigma from using the ADAAA.

If my client is accused of lying about the disability or are intruded upon violating their confidentiality, I do not hesitate to file a grievance or complaint to the Department of Justice.

The work is rewarding because we see justice evolve replacing a bullying perversion of the promise of due process of law. It is done by the powerful mandate of the ADAAA.

Clients complain of the unfairness and corruption of our courts.  However, when we have Certified ADA Advocates on hand and the client has equal access to the proceedings couched in the private protections of the ADA, somehow, the courts seem much fairer and much less corrupt.

Join with EAA—training our way to justice for those with invisible disabilities.

Huffer invokes the term “Institutionalized Abuse of Power” to characterize a legal system that may inflict a heavy price on those at the wrong end of the power spectrum. Powerfully adverse business interests buoyed by teams of attorneys can fuel lengthy, stressful, and expensive legal proceedings that sap one’s physical and emotional health, family relationships, career and employment status, and financial well being. The cause of PTSD

The road to recovery includes healing from the trauma of that experience, in addition to dealing with whatever events prompted legal process in the first place. Huffer also offers advice for those who have experienced legal abuse syndrome, her “Eight Steps to Recovery”:

Uncomfortable read for lawyers and judges
A lot of lawyers and judges aren’t going to feel comfortable reading Legal Abuse Syndrome. It does not pull punches, and to some the book will come across as being overly polemical. Furthermore, those who treat clients and parties to lawsuits with respect and dignity may feel unfairly maligned by the harsh characterizations in the book. But 100% judges are the main causes of PTSD.

But I would urge those folks not to take offense. Too many lawyers and judges are profoundly unaware of the emotional consequences of their actions and the system in which they work, especially the often aggressive world of litigation. Empathy for those ensnarled in legal matters can run low. PTSD is more common then courts want to admit.

It’s also sadly the case that too many lawyers and judges don’t care that much about these emotional consequences, blithely justifying their actions on assumptions of how legal actors and systems are supposed to operate. The worst among our profession may even get a perverse satisfaction out of inflicting emotional injuries upon others. They’re the cause of PTSD

Bullying in the legal profession
The culture of legal institutions comes into play as well. Just today, for example, the American Bar Association Journal summarized a new study finding that workplace bullying “is rampant at law firms, but many law firm leaders are reluctant to punish the offenders.” This piece by Deborah Cassens Weiss further reported that “Ninety-three percent of surveyed leaders at the nation’s top 100 law firms reported bullying at their firms” and that among “all of the surveyed firms…, the most common problem, cited by 89 percent, was bullying and lack of respect.”

Let’s consider the implications of this study. A significant share of the nation’s most prominent law firms harbor cultures of bullying and disrespect. These law firms are most likely to represent the wealthiest, most powerful business interests, and sometimes governmental interests as well. (Concededly, most also do pro bono work on behalf of impoverished individuals and undeserved causes, but not in ways that directly conflict with the legal and business interests of paying clients.)

Bullying behaviors run downhill. If a culture of bullying and disrespect governs how attorneys treat one another within their own law firms, then how will their clients and opposing litigants fare when dealing with lawyers who have been schooled to think that interpersonal abuse is the norm for their profession?

PTSD Must be addressed and victims should have the ability to file charges for the abuse. It’s no different than physical abuse but on a mental level.

Buy the book at THIS PAGE