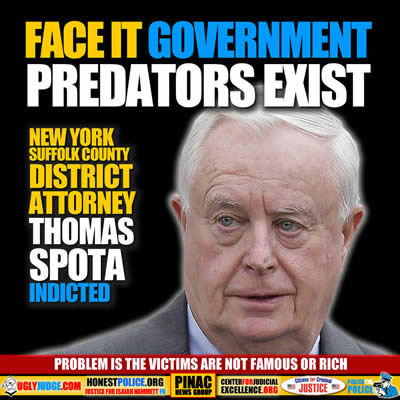 Face it Government Predators exist Suffolk County New York District Attorney Thomas Spota indicted
Perhaps thousands of victims, innocent people extorted, threatened, locked in prison, families destroyed by a Predator who had no problem getting hired and into a position of power. How many hundreds of victims did it take till he was removed. While Harvey Weinstein abused and committed crimes against the rich and famous the real victims can’t afford top lawyers or get the attention famous people get.

Suffolk County District Attorney Thomas Spota and the chief of his anti-corruption bureau, Christopher McPartland, were named in an indictment charging them with obstruction of justice, witness tampering and other offenses related to the case against former county Police Chief James Burke.

District Attorney Thomas Spota has announced his intention to retire after 16 years in office. a day after being charged in an assault cover-up case.

“I will be leaving my post as District Attorney at the earliest opportunity after the resolution of normal administrative matters relating to my retirement. The Governor will be notified of my decision today. The Chief Assistant District Attorney, Emily Constant, will thereafter assume my duties and responsibilities.”

District Attorney Thomas Spota, 76, and Christopher McPartland, 51, the head of the district attorney’s political corruption unit, were taken into custody by the FBI on Wednesday.