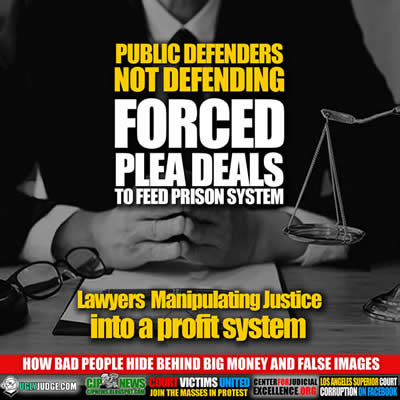 A plea deal is an A A plea arrangement to resolve a case without going to trial. This is an option most often taken by those who cannot afford bail and want to go home instead of wait days, months, even years locked up in jail. An estimated 177,624 innocent Americans pleaded guilty in 2013 alone. Does this sound like a justice system to you?

This is the age of the plea bargain—and millions of Americans are suffering the consequences.

All over America INNOCENT people are being railroaded by dishonest judges and lawyers in a conspiracy for profit. Hiding like dishonest, criminal rats in expensive fancy suits or fake black robes. They abuse power and impunity to terrorize, intimidate and profit off those who can’t afford their ridiculous over priced services.

Many individuals who have been exonerated of wrongful convictions recount the weight that was lifted when their cases were overturned and the state dropped the charges against them. Sadly, not all wrongfully convicted people released from prison enjoy that same sense of relief. As a recent story by ProPublica reveals, in too many wrongful conviction cases, innocent people are pressured by prosecutors into taking plea deals in exchange for their freedom, when, in reality, solid evidence demonstrates that full exoneration’s are in order.

There’s an assumption that when someone pleads guilty to a crime, swearing to tell the truth and allocuting to all the elements, he actually committed it.  But this is not necessarily true.

We all know that innocent people can be found guilty of crimes they didn’t commit, but innocent people might actually choose to plead guilty simply because they’re afraid to go to trial.  The fear is based on a simple fact — people who go to trial and are convicted get much heavier sentences than those who plea-bargain.

Although the Sixth Amendment guarantees the right to a speedy and public trial, because the system favors plea bargaining, some defendants give up that right to save extra years in jail.  It’s a question of practicality.  Whether the person is innocent or not, jury trials are always a crap shoot, with the verdict uncertain until rendered. If you’re offered probation pre-trial by pleading guilty but know a judge will give you jail if you lose trial, you might choose to say you did something that you didn’t do just to avoid jail. It would take the most stalwart belief in justice (and your attorney) to go forward when a guilty verdict has you serving a much tougher sentence.

Adding to this watering down of the Sixth Amendment is the fact that most defendants take pleas without even knowing the strength of the case against them.  Prosecutors in most states are not required to share evidence they’ve gathered until the eve of trial.  But defendants who wait till then lose the benefit of a plea bargain. It’s not uncommon for judges to tell defendants as they’re being arraigned, “If you don’t take this plea today, it’s off the table.”

There are benefits to this system of course — it diminishes court dockets and saves the expense of conducting a trial.  Plus aren’t most defendants guilty anyway, so why gobble up scarce resources just to prove it?  Because that’s what the Sixth Amendment compels.

To fight against government tyranny in the criminal justice system, America’s Founding Fathers enshrined into the Constitution the “right to a speedy and public trial, by an impartial jury.” Plea bargains, however, have become, as the Supreme Court of the United States (“SCOTUS”) said, “not only an essential part of the process but a highly desirable part.” While plea bargains have streamlined the management of court caseloads, they all too often result in the conviction of factually innocent persons or create final judgments that are legal fiction.

Thomas Jefferson said, “I consider [trial by jury] as the only anchor yet imagined by man, by which government can be held to the principles of its constitution.”

Plea bargaining was first introduced as a legal tool that could protect citizens’ rights and address the need for courtroom efficiency. It, however, was criticized as being too radical from the system’s trial nature and removed jury safeguards against wrongful convictions. By the late 19th century, the nation’s population growth and increased policing systems, combined with expanded criminal codes, placed an increasing caseload on prosecutors, and they normalized plea bargains into the process to quickly resolve cases despite the criticism.

As plea bargains gained momentum in the 1800s, its practice also began to evolve and shift. Prosecutors, for instance, began overcharging suspects to increase perceived performance and to frighten defendants into taking a plea to avoid severe penalties from multiple charges. A practice that continues to the present is the filing of an indictment that contains multiple charges to gain leverage to obtain a plea on one charge, or charging a higher offense to gain a plea on the actually committed lower offense.

“American prosecutors are equipped with a fearsome array of tools they can and do use to discourage people from exercising their right to a jury trial.”

SUPPORTING STORIES
Wrongly Convicted Forced into Plea Deals to Gain Freedom
Innocence Is Irrelevant this is the age of the plea deal & millions of Americans are suffer the consequences
Innocent People Who Plead Guilty
Plea Bargaining: Prosecutors Leave Trail of Injustice When Playing Hardball with Defendants
WHY DO INNOCENT PEOPLE PLEAD GUILTY TO CRIMES THEY DIDN’T COMMIT?
Are Innocent People Pleading Guilty? A New Report Says Yes
A lawyer argued that plea deals are unconstitutional. Now the DA won’t bargain with her
Prisons are packed because prosecutors are coercing plea deals. And, yes, it’s totally legal.