Bill Windsor is an independent film and TV producer, and is part of the alternative media (i.e. no corporate sponsors or managers that have to “clear” his stories.) His LinkedIn profile shows that he studied Radio-TV-Film at the University of Texas, and marketing at Texas Tech University. He worked as a radio and television announcer while in school, and later went on to start over 50 companies. 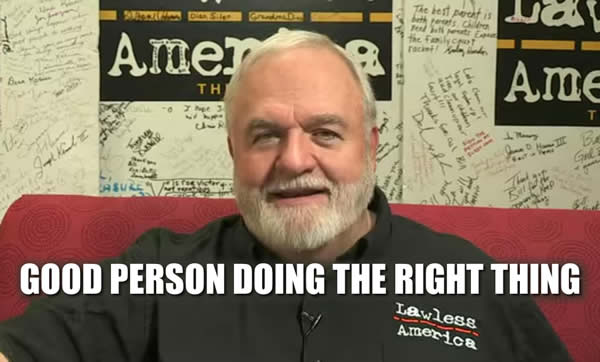 Bill Windsor’s criminal charges have been revealed thanks to the work of Mountain Goat Couriers in Missoula, Montana .
Bill Windsor is charged with three felonies and two misdemeanors in an action that essentially means Montana law enforcement and Montana courts have voided the Constitutional right of Freedom of Speech. William M. Windsor has no intention of taking this…

William M. Windsor figures if you could spend seven years in prison for  publishing two legal documents online that contained the name of a defendant in a lawsuit (two crimes); sending an email to an attorney in Montana who represents a defendant (third crime – a felony); not giving a defendant Bill Windsor’s TV show website (fourth crime – a felony); and sending a Tweet with the name of a defendant in a lawsuit (fifth crime – felony), maybe he should swing for the fences?At two years a whack, Bill Windsor only has to publish the name of a Montana criminal 14 more times to earn a spot in prison until he reaches the age of 100.  Might as well publish it a few hundred times for good measure so the jury will be looking at giving Bill Windsor a death penalty — so many years that he will die in prison.  And if Bill Windsor faces a death penalty for publishing someone’s name in a lawsuit, emailing an attorney about a lawsuit, and filming a movie, maybe just maybe, this will get some attention.

Seven (7) years in prison and $7,000 in fines is what they are seeking for these five alleged crimes — all clearly protected by the alleged Constitution.

Filmmaker Bill Windsor has been in the process of producing a film called “Lawless America” since 2005. It is a film project which exposes the corruption in the American judicial system. He currently has over 1200 videos in his YouTube channel of testimonials from American citizens who have experienced corruption in the judicial system first hand.

Windsor was detained in Texas in October of 2014, and held in jail for over 50 days before being released in December of 2014. He is 66 years old, and claims this is the first time he was ever arrested and detained, and previously had never been charged with a crime. He states he has never used drugs, and is a “non-violent law-abiding citizen.” He has filed numerous lawsuits across the country, including a couple of cases where he claims he was attacked by “cyberstalkers” who allegedly want to discredit his work.

Judge James Haynes denies almost everything that I request, but I persevere because I always want there to be a record of every bit of wrongdoing. I have been denied subpoenas for my witnesses, so it is not likely that I will have any except for people who happen to be in the courtroom. No juror questionnaires; they were supposed to be provided a month ago by statute; she says they will be available a week before the trial. Yesterday, I filed objections about these two violations of the law and due process. Today, Judge James Haynes scribbled “overruled” on the top of my filing and had it returned to me by email.

On December 15, 2015, I sent my final Jury Instructions to the Prosecuting Attorney as she agreed to file them with hers. Today at 6:30 pm, I received a copy of her filing of her Jury Instructions. She didn’t do anything with mine. So I spent the next five hours working on that. I’ll have to UPS mine tomorrow.

If Judge James Haynes had any intention of dismissing the case, he would have done it today. So, looks like January 5 it is. I could be back in jail on the 6th.

LawlessAmerica.com website is down with some kind of strange login message. I emailed the hosting company in Iceland, and they said nothing was wrong. ?

The Joeyisalittlekid gang says the feds did it and that there are U.S. Marshals waiting to get me in Missoula. Those folks couldn’t tell the truth if their lives depended on it. But, I would no longer doubt anything that government officials might do to silence me.

The trial is January 5-6, 2016 at the Missoula County Courthouse in Missoula Montana. Please come.

Most of us don’t really care that much about someone else’s story. I don’t blame anyone for not being interested in mine. BUT, I have by far the most documentation of judicial corruption that anyone has ever amassed — and that’s just cases involving me. My evidence should certainly prove compelling to anyone who doubts that the corruption is real.
HERE’S MY STORY: http://lawlessamerica.com

Bill Windsor as reported by Crystal Cox
A whole lot of Taxpayer money has been spent to SHUT Up a REPORTER exposing corruption in MONTANA. Watch the State of Montana v. Bill Windsor, Film Producer and Anti-Corruption blogger case.

Just as I reported on 7 years ago; Montana officials will go as far as it takes to SHUT UP MEDIA reporting on the TRUE inter workings of the Montana Judicial Process.

I reported on Montana Corruption, Rapes NOT investigated, overreaching Judges, and lot’s more for years. As did anti-corruption blogger Michael Spreadbury. Montana authorities IGNORED us. Bill Windsor of Lawless America reported on US and the State of Montana went after HIM.