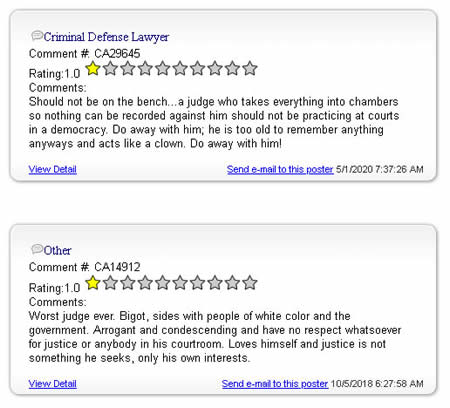 Judge David A Cena told the court
“The American legal system is not a perfect system. The (families’) loss is so great that no legal sentence could ever diminish its magnitude.”

Judge David Cena was born in Weed, a small lumber town nestled just west of the slopes of Mt. Shasta along Interstate 5.

He worked summers in a saw mill during college. Cena slogged through cleaning duties on the ground floor but worked his way up to more complicated jobs operating machinery.

Once, as Cena was changing the blades of a twin band saw, a heavy, metal hood that had been momentarily raised slammed down on his hands. The hood struck a ring on one of Cena’s fingers, sparing his digits.

A career in law might be less likely to cost you a finger, but Cena has brought the same work ethic 300 miles down the I-5.

After graduating from Hastings College of the Law in 1978, Cena joined the San Jose insurance defense firm of Popelka, Allard, McCowan & Jones and stayed put for 16 years, eventually becoming a partner.

In 1995, Gov. Pete Wilson appointed him to Santa Clara County Municipal Court. Three years later, Cena ran for a spot on the superior court, even though the two were heading toward consolidation that year.

He lost to Joyce Allegro, then a prosecutor , but consolidation elevated him anyway. Cena thought he might get to hear civil cases, given his 16 years of experience.

Eleven years later, he still hasn’t received a civil assignment. But he is the supervising criminal judge for the entire county and presides over San Jose’s Hall of Justice.

Cena has rotated through the county’s criminal departments, from drug court to a felony trial calendar. As supervising judge — a position he took in April 2008 — Cena is now more of an overseer, but attorneys still go to his courtroom to settle cases.

“I think everybody feels like they get a fair shake with him,” Deputy Public Defender Molly O’Neal said.

O’Neal, co-chief of her office’s felony trial team, said deputies favor Cena for their plea deals, especially if they want to make a Romero motion to nullify a defendant’s prior strike under California’s Three Strikes law.

When a public defender wants to “strike a strike,” as it’s called, “you want to be in front of a good judge, or you don’t plead,” O’Neal said. That’s because by the time a judge rules on the motion — brought under People v. Superior Court (Romero) , 13 Cal.4th 497 — the defendant has already committed to pleading, O’Neal said.

“Obviously, people with strike priors have a prior criminal history, and you just want to know that a judge will take into consideration all the relevant factors, and he does,” she said.

Ironically, of two published state appellate cases arising from a Cena ruling, one came after Cena doubled a defendant’s sentence by declining to strike a strike.

In a 2002 case, Cena sentenced Anthony Lee Moore to three years for selling methamphetamine and doubled that term because Moore had pleaded guilty in 1999 to making death threats against his ex-girlfriend and her new boyfriend. The Sixth District Court of Appeal affirmed Cena’s decision in 2004 in People v. Moore , 118 Cal.App.4th 74 .

Deputy District Attorney Dana Overstreet, who leads the homicide unit, said the fact Cena has gone both ways on the strike issue indicates that he’s a fair judge. “That’s kind of what you look for to see if you think a judge will at least give you a fair shot,” she said.

The Sixth District reversed Cena in 2006 in the second case, People v. Superior Court (Walker) , 143 Cal.App.4th 1183. Prosecutors had appealed Cena’s grant of a motion to suppress in a marijuana-for-sale prosecution, where police had entered a Santa Clara University dorm room without a warrant to seize a student’s pot and paraphernalia.

Cena agreed with the defense that a university security officer who entered the room with the student’s consent could not give Santa Clara police permission to enter. The Sixth District ruled that authorities would have gotten the evidence — pot, cash and an electronic scale — even if they hadn’t entered.

Cena, who met his wife on a blind date in 1986 and has three teenage children, said he wanted to be a judge because it was a “logical progression,” something he could do well, and because it would give him more time to spend with his family.

The work has had its ups and downs. Presiding over murder trials, Cena has seen shattered lives in every direction. But taking a chance on a meth dealer in drug court, and watching him come through, was satisfying: He recalls how that defendant, given a suspended sentence and the opportunity to complete probation, returned to the courthouse to counsel other defendants at their arraignments.
Full Story

Santa Clara Superior Court Judge David Cena this afternoon sentenced a sheriff’s deputy to four months under house arrest and 20 weeks of community service for striking and killing two bicyclists with his patrol car when he fell asleep at the wheel while on duty in Cupertino last year.  James Council, 28, pleaded guilty in May to two misdemeanor counts of vehicular manslaughter in Santa Clara County Superior Court, according to district attorney spokeswoman Amy Cornell. He reached a settlement with the
district attorney’s office in a pre-trial conference. Relatives and friends of the victims have accused Council of having received preferential treatment because he was a deputy. On March 9, 2008, Council’s patrol car crossed a double yellow line on Stevens Canyon Road around 11 a.m. The vehicle struck and killed two bicyclists, Kristy Gough, 30, and Matt Peterson, 29. Another cyclist was injured. Dressed in a dark suit, Council stood facing the judge and claimed responsibility for the accident in court today. In between sniffles and tearful gasps, he said, “Not a day goes by that I don’t think about the morning of March 9. I know that there’s nothing I can say or do to replace their loss. I’d like them all to know truly from the bottom of my heart, I’m sorry.” After about an hour and a half of listening to remarks, Cena told the court, “The American legal system is not a perfect system. The (families’) loss is so great that no legal sentence could ever diminish its magnitude.”  Council’s attorney Mike Rains said afterward that his client had received harsher treatment by the system because he was a deputy.  “I’m not happy about (the sentence). I think the sentence is harsh, and it’s harsh because he’s a law enforcement officer,” Rains said.  Tears, sniffling and shaky voices created an emotional and somber atmosphere in the courtroom as the victims’ family members and friends stood FULL STORY