Riverside County California Judge Dale R Wells has a history of problems and violations of rights and law. If you’re assigned to a case involving this judge have him removed. Google his name as the internet, Facebook and other social media has many cases and victims regarding Judge Dale R. Wells

People are outraged at the obvious violations and abuse by judge Dale R. Wells
See the Petition at

Judge Dale Wells, has victimized children by retaliating against parents, predominantly mothers, in the Riverside Superior Court, in the United States. Judge Wells trademark is to issue non noticed expartes, declare mothers an immediate flight risk and remove their young children from them causing irreparable harm and trauma to children and their parents. Judge Wells has a 12 year history of precisely that pattern and is the judicial weapon of mass destruction in the Riverside Superior Court, Indio branch, in contravention of any valid family law standard. Judge Wells makes a mockery and rapes the CA legislatures intent that joint custody is in the best interest of the child, and dismisses all evidence of abuse. Children are non sentient beings in Judge Wells court room, where blood has to be on the floor in order for any need of a child to be addressed.

Due process and the rudimentary application of civil code procedure and family law for any hearing is simply ignored.The court requires that litigants and attorneys adhere to the law. Judge Wells has specialized in abusing the law for his own vindictive purposes and continues as the malicious weapon of mass destruction of the Riverside Superior Court.

Judge Wells current term as a judge will end in 2017 where he will be subject to a re-election process. The Court reappointed Judge Wells to family law despite public protest to his re-appointment. No one deserves the experience of being subjected to the arbitrary, malicious and absolutely insane, capricious decisions that have marked his tenure.

Judge Wells during his tenure in the Riverside Superior Court has also found that the forcible rape of a child was of no relevance and dismissed 47 counts of forcible rape as in his belief an 11 year old child consented to rape, http://www.kesq.com/news/24358768/detail.html

Judge Wells removed a 4 year old child from his home in Puerto Rico from his mother alleging crime rate as the basis for his actions.

Judge Wells has continued with his rampage of the family law system since 1998 as evidenced by the most recent comments and the comments that were removed from the Courthouse forum website. There have been no checks and balances in place to hold a judge accountable for his abusive judgments and decisions that torture children and their parents alike, despite considerable public process and the malicious abuse of judicial office, violating the integrity of the judicial process.. The checks and balances continue to be completely absent and Judge Wells continues to violate every single standard of law basing the application of procedures on concepts that violate the law and the domestic violence act, even ordering CCP section 177.5 OSCs against attorneys for filing an exparte pursuant to CA family code section 3064 and California rules of court 5.113. Judge Wells conveniently forgot that CCP 177.5 only applies to violations of court orders with his non-noticed OSC, that was not filed on the mandatory form pursuant to CA rules of court 5.92 (a).

Some of the comments that were on the Courthouse forum have been pasted once again in this petition.

We call upon a forensic audit of the Riverside Superior Court by the State Audit Committee so that the Public is finally protected from the decisions of a Judge who has been allowed to run rampant in the Riverside Superior Court and the removal of this judge from family law.  The petition currently has over 30 pages of comments from the public who are absolutely outraged at the pervasive family court massacre that remains unabated. Horror story after horror story emerges from Department 2 J based on the the actions of Judge Dale Wells.

Judge Well has a history of placing false statements in court records and perpetuating false and fraudulent court records with the Riverside Superior Court against anyone who is deemed to be a target parent.

Judge Wells has alleged that he has a direct link with the Federal Government and has received alleged medical information that has been released without any subpoena process, violating the HIPPA act. These statements of course feed Judge Wells’ delusions about an alleged eating disorder that Judge Wells fixates on without addressing his own personal problems and that his own daughter has begged for his removal from family law as a judge in family law due to his incapacity to actually address the law and valid and accurate issues in family law. These allegations do not have any relevance except to feed Judge Wells’ fixation against a target parent.

Judge Wells screaming fits are well known including the false perpetuation of his delusions against a target parent. Judge Wells is knows as a hysterical male in family law and the complaints over a 20 year period alleges that he is incapable of actually seeing the true issues in family law or viewing people/children as human beings, perpetuating his father fixation as his own children were removed from his care after the first divorce.

Perfect bags of vomit can be placed at Judge Wells door as his address is public record. 82775 Matthau Dr, Indio, CA; 92201. Judge Wells will not stop feeding his delusions. This is a well known tactic by Judge Wells to avoid dealing with any of his issues as he is well known for fabricating issues against other people so that he is capable of addressing his own personal life and to feel successful. He floods the entire court with his hatred against specific individuals and insane delusional statements and refuses to stop feeding his delusions. 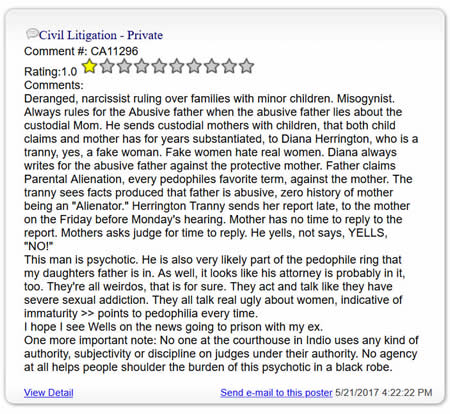