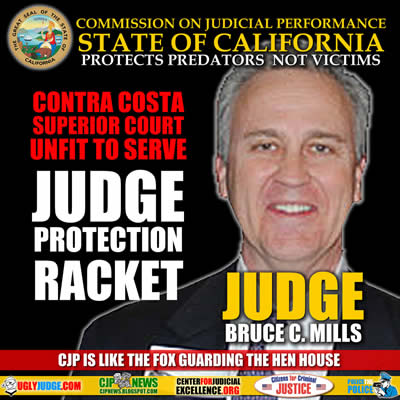 Judge Bruce C. Mills
California is well known for corruption and fraud which takes place in our courts by criminals like Judge Bruce C. Mills. A poster child for how you can take a dishonest person and drap them in a black robe and call them honorable when in fact they have no honor at all. What’s worse is what a joke the Commission on Judicial Performance is, how they ignore valid complaints and refuse to protect the public.

In a decision First Amendment experts have dubbed “outrageous,” a Contra Costa Superior Court judge Bruce C. Mills jailed a San Ramon man for writing about his divorce on the internet — even though his writings were based on material publicly available in court files.

The judge Bruce C. Mills, insisted in his decision that “matters that are put into court pleadings and brought up in oral argument before the court do not become public thereby” — a position that lawyers say fundamentally misunderstands the nature of court records.

Joseph Sweeney, a judicial reform advocate, served 13 days in County Jail in August after Judge Bruce C. Mills’ ruling, which found that Sweeney’s web postings had violated another judge’s restraining order not to disclose the contents of his ex-wife’s cellphone or computer. The postings described Sweeney’s realizations about her medical history and contact with others that led to the collapse of the marriage.

The information became publicly available in court documents when it was filed without seal by his ex-wife, and in an online appellate court decision upholding the order. As a result, “the cat is out of the bag and the general presumption that publicly filed documents may be read by all carries the day,” said Floyd Abrams, considered among the top First Amendment lawyers in the United States, in an email to this newspaper.

Several other free speech experts also said Judge Bruce C. Mills’ assertion that the information was not public record is flatly wrong. Martin Garbus, widely considered one of the top trial attorneys in the United States, said court documents filed without a sealing order are legally just as public as newspaper articles.

A report cataloging serial acts of misconduct spanning more than 10 years by Judge Bruce C. Mills has been leaked to the public by a court watchdog and whistleblower group.

The 51-page dossier collected both public and “secret” discipline prosecutions against judge Bruce C. Mills  by the Commission on Judicial Performance, the state agency responsible for judge oversight and accountability. The report is embedded at the end of this post.

The report reveals that in addition to two well known public disciplinary actions taken against the veteran Contra Costa County jurist, Mills was also found guilty in three additional incidents where the type of discipline and name of the offender were “private” and not revealed to the public.

The group identified judge Bruce C. Mills as the offending judge in the secret proceedings by reverse engineering details from the public disciplinary actions and cross referencing the information with old CJP annual reports. The acts of public and private misconduct occurred in 2001, 2006, 2008, 2011 and 2013.

judge Bruce C. Mills, 62, a judge since 1995, has until Oct. 31 to file a written answer to the administrative charges. The agency will then schedule a hearing before a panel of special masters appointed by the California Supreme Court.