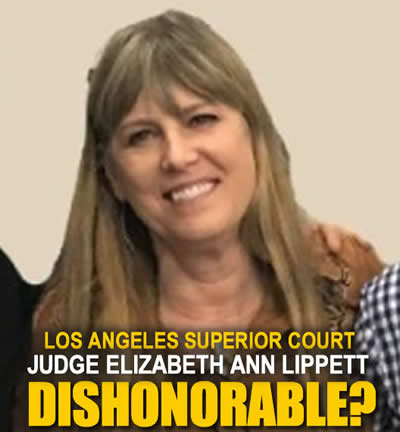 Judge Elizabeth Lippitt of the Los Angeles Superior Court to our Board of Directors. Judge Lippitt, a product of Colorado College and the University of Denver Law School, is a former prosecutor who tried over 100 felonies to verdict. Since her appointment to the bench in 1997, she has served in both criminal and civil assignments, and recently taught at the Consumer Attorneys Association of Los Angeles convention in Las Vegas. She has been recognized for work with Teen Court and AAJ Moot Court.

The Widow M Saga Highlights How Judicial Corruption Undermines Society
A judiciary which has zero accountability destroys justice and the consent on which the government is based. Case in point: Los Angeles Superior Court Judge Elizabeth Lippitt and the on-going saga of the Widow M.

Perhaps sensing that it is a gross violation of judicial ethics, which even an appeals court might not countenance, Judge Lippitt omits from her November 5 minute order her removal of the Widow M’s private attorney, yours truly Richard Lee Abrams. (Material omissions can be falsifications.) Without an order, the Widow M and Attorney Abrams have nothing to bring to the appellate court. After all the attorneys agree that Judge Lippitt had abruptly removed Attorney Abrams as one of the Widow M’s attorneys and after repeated requests that she issue a proper minute order for the November 5 hearing, Judge Lippitt does nothing.

The California Supreme Court has stated: “Smith v. Superior Court (1968) 68 Cal.2d 547 makes it abundantly clear that the involuntary removal of any attorney is a severe limitation on a defendant’s right to counsel and may be justified, if at all, only in the most flagrant circumstances of attorney misconduct or incompetence when all other judicial controls have failed.” (Cannon v. Com on Jud Qual, 14 Cal.3d 678 (1975))

Since Judge Lippitt has been moving forward with her plans to financially destroy the Widow M by depriving her of control of all her property and appoint Jeffrey Siegel to seize control of all her assets, it seems that someone prevailed on Judge Lippitt to document Attorney Abrams’ removal. (Judge Lippitt has absolute judicial immunity, but not so Jeffrey Siegel or CAC Delahoussaye who can be sued by the trust beneficiaries.) Thus, twenty days later, on November 25 without notice to anyone, and with no court reporter, Judge Lippitt holds a secret hearing: “On the Court’s own motion and review of the last hearing, the Court finds the following: The Court has appointed Audre Delahoussaye Quantrell as Court Appointed Counsel of record in the Conservatorship of Patricia MacFadden.” Still devoid of judicial integrity, Judge Lippitt merely states that she has “no position about Attorney Abrams’ capacity in other matters.”

Despite requests for copies of the November 5 transcript, none has been received. As CAC Delahoussaye said, the Widow M needs no transcript; she can rely on CAC Delahoussaye. Yeah, like other widows could rely on Bernie Madoff. Refusing to allow a transit is also against the canons of judicial ethics.

As if Judge Lippitt’s outrageous behavior was not already 1,000 miles out of bounds, she never served this secret November 25 order on Attorney Abrams — despite the fact that he is her target.

Do not be deceived into thinking that Judge Lippitt is an isolated case. The coven of evil’s behavior has become standard operating procedure in Los Angeles Probate.

Most Americans think that the problem is good people’s being silent.    Yes, that is part of it, but there are other aspects. People often do not know. While they may hear some things, they don’t really know, and there is always counter propaganda. Then, it is hard to believe the stories or those tales may be just a few rotten apples. The big hurdle is that we do not feel the great psychological and financial harm a predatory judiciary inflicts upon people.

In LA conservatorship court (under Probate), for example, the elderly can be fleeced of a lifetime of effort because the court and its retinue want the old person’s property. Let’s look at a real case.

Facts: Widow M falls under the psychological control of her adult daughter and her finances are drained – perhaps by $1 million. Her adult son files for a conservatorship as that forces the daughter to bring the mother to court, where visitation with the son is ordered and then a mediation is set.

Mediation: After the mediation, the Mom gets to be with her son for 30 days and then decide where she wants to live. The Widow M chooses her son and then she hires were own private attorney whom she has known for over 45 years.

The Ransom for Her Escape: The mother, who everyone agrees does not need a conservatorship, has to sign an agreement to sell her three homes.  First to go will be her large Verdugo Hills house in Glendale, next to go will be her small single-family rental in Rancho Rivera, and then last to be sold is her large house in Temecula.  The court-appointed attorney [CAC] ambiguously assures the widow that the CAC’s children will pay for the Verdugo Hills property. Also, the widow has to support her 50-year-old daughter (who has a BA from NYU and was a real estate agent) at $1,000 per month for life and allow the daughter to live rent-free in mother’s Temecula house until it is sold. (How does the victim end up supporting the abuser? The court gives no answer. Here’s the answer: the more drains on the widow’s assets, the faster the court can justify selling her houses.)

Deal Falls Apart: The adult daughter refuses to keep her part of the bargain to give up all the widow’s financial papers for Widow M to restore her finances. The daughter’s refusal crashes the mediation deal. When one party refuses to perform, that refusal kills the agreement.

Aftermath of the Deal’s Collapse: The mother and her real attorney hire a forensic accountant and restore her cash flow to the black by short term rentals on Airbnb. This infuriates the judge.

Lynchpin to the Scam: There was supposed to be a court appointed trustee to take over the Widow M’s trust and then manage her properties (i.e. drain her assets). Here’s how this management often works: The judge appointed trustee does all sorts of work on the properties at inflated prices and loads up the properties with liens. By running up the costs far above the Widow M’s income, the trustee declares the need to sell the houses. When the Widow M at 79 and her friend at age 74 rehab the homes without a single lien, the scam falls apart. There are no liens on the property (except mortgages) and Widow M is making thousands per month.

The CAC ignores everything the Widow M says and makes false claims to the court about the Widow M’s private attorney. When the CAC files a petition to force Widow M to sell her properties, the Widow M fires the faithless court-appointed attorney. Who wants their own attorney to go into court and file motions against them? (Under the Fracasse case, clients have an absolute right to fire their attorneys.)

During a court hearing, the Widow M’s private attorney recites evidence about the CAC’s malpractice, breach of fiduciary duties and breach of her duty of loyalty. Judge Lippitt says he should not disparage the CAC. What sort of court tells litigants not to bring to the court’s attention wrongdoing by the other side? Then, Judge Lippitt removes Widow M’s private attorney as the widow’s attorneys of record. No notice at all. Just out of nowhere, Judge Lippitt says that he’s no longer the attorney.

This is one way that judges manipulate the evidence. They simply remove the attorney who produces evidence that the judge dislikes. Now, the Widow M has no one to introduce any evidence in her favor.

People familiar with Dexter Jacobson will recognize that this scenario is how he came to be dead in Marin County with a bullet in his head. He complained about the federal bankruptcy court referees looting the assets of people going through bankruptcy. Let’s be clear about this situation – fleecing the elderly is big business and these thieves are not going to let the law, due process, facts or pesky attorneys stand in their way.

When families seek judicial intervention, they have no clue of the web of judicial abuse, deception and theft of the family’s assets that will soon ensnare them.

One typical scenario, which compels a family to seek judicial help, is an elderly family member is being held hostage while his/her assets are drained. The family does not foresee that the abuse of the hostage taker is about to be replaced by the abuse by the probate court. The various mechanisms employed by the court are limited only by the ingenuity of the judges, but certain patterns are often seen.

As explained previously Financial Rape: Business as Usual in LA County Probate Court, Judge Lippitt forces the elder person to mediation where the person is subjected to fraud, coercion and exhaustion.  All the elder has to do to gain her freedom from the seemingly endless mediation is sign whatever documents the coven of evil shoves in front of her.

As Judge Paul Suzuki explained, all that matters is that she signed the settlement agreement.  The  Mozer v Augustine supports Judge Suzuki. It does not matter if the elder is comatose during the mediation, all that counts is that somehow the elder’s signature appears.  How it got there is irrelevant and no amount of fraud, threats, lies, etc. may ever be introduced into court to show that the elder was financially raped.  (Mozer cites: Evid. Code, § 1119 (a)-(c) mediation communications are confidential. “Sign this or never see you son again” – not admissible under Mozer)

As those who follow the Widow M’s saga realize, while under Judge Lippitt’s supervision, Attorney Audre Delahoussaye-Quantrell, the Widow M’s court appointed attorney, owes no duties to the Widow M.   The Rules of Professional Responsibility which allegedly govern the ethical conduct of all attorneys have become propaganda tools to mislead the public into falsely believing attorneys place the client’s interests before the attorney’s personal and financial concerns.

State Bar Rule 3-310.  An attorney cannot represent a client when the attorney has “a legal, business, financial, professional, or personal relationship with another person or entity the member knows or reasonably should know would be affected substantially by resolution of the matter.”

Ha. Double Ha-Ha, Pshaw if you think that rule prevents CAC Delahoussaye from continuing her representation of the Widow M after admitting that she is forcing the widow to sell her property because CAC fears she will be sued if she follows the Widow M’s desire not to sell her property.  CAC exact words were:

How Should the Court and the State Bar React to Such a Written Admission?

“Lawyers owe every client an ethical obligation to represent the client free of competing interests or loyalties, including the lawyer’s own personal interests, that would materially impair the lawyer’s representation of the client.” State Bar Ethics Opinion, 2019-197

In its propaganda campaign that attorneys owe duties of faithfulness to their client, the State Bar continues:

The propaganda continues with the State Bar’s writing:

“”Conflicts of interest broadly embrace all situations in which an attorney’s loyalty to, or efforts on behalf of, a client are threatened by . . . his own interests.”). The duty of loyalty is reflected in the California Rules of Professional Conduct, including rule 1.7, as well as by case law and common law.”

RATE Judge Elizabeth A. Lippitt at the Robing Room 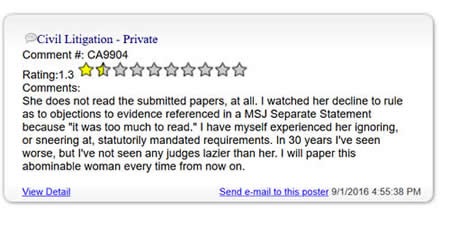 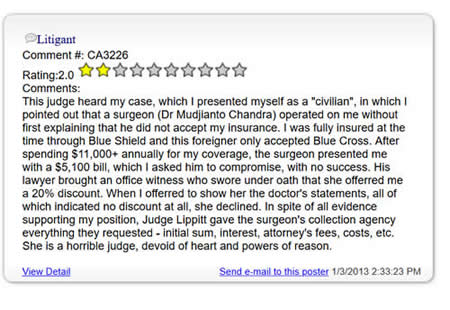