Home Arizona What Do Harvey Weinstein, Sheriff Lee Baca and Officer Ray Tensing Have In Common?

What Do Harvey Weinstein, Sheriff Lee Baca and Officer Ray Tensing Have In Common? 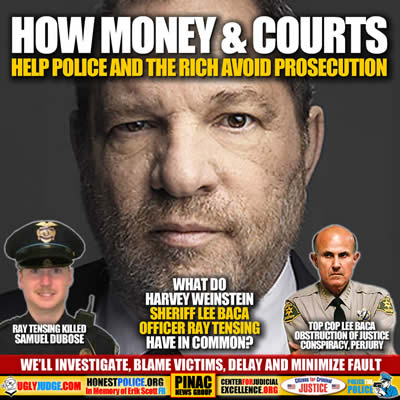 What Do Harvey Weinstein, Sheriff Lee Baca and Officer Ray Tensing Have In Common?
What Americans need to see is how a calulated, manipulated system is used for Police and the Rich to avoid punishment. There is no equal justice in America, there never was. Lawyers and money are in the fact the root to all evil and if you have government (power) or money (enough to buy justice) . There is a game being played in America at the cost of justice, lives, tax dollars and every American’s rights.

The game and delays done on purpose (Money and Courts) use common catch phrases like:
We’ll investigate ourselves
This is a disease not my fault
It’s our training not my fault
Spread false information
Destroy Victims characters
Don’t believe what you see or hear the courts will decide
He’s in treatment

Innocent until proven guilty is a big lie.
When you do it, police treat you as guilty without a trial, full evidence or the facts. However when they do it none of that matters they get protected, privelages and allowed ANY excuse such as “I fear”. The Triade of our system, Police, Courts and Lawyers are totally biased by money and their own thus can not equally judge.

They want to forgo accountability, place blame on anything but themselves. When in any other case (no money or power) you go straight to jail even if you are in fact innocent. How many people have spent decades in prison or were executed while being innocent by a broken system?

Have Money of Power (Part of Government)?
The truth is, they already know they’re guilty. Yet they’ll most likely never spend a day in jail. They’ll keep their benefits, right to get hired again. Homes, life and freedom. Things none of us get when we commit the same crimes or abuses. There is in deed two classes in America. Those who MUST OBEY and those who do not. Laws and justice should be about equality and all however because money and lawyers make create our laws, they’re designed to be manipulated.

We can look at people like OJ Simpson, Bill Cosby and now Harvey Weinstein and the justice they were able to buy to make what they did go away. To minimize it, ignore it, blame is on others. Big business like banks and corporations have the same power and even when CEO’s are to blame or at fault they’re rarely accountable.

With the advent of video and audio via cell phones, undeniable evidence has exposed just how much police and government lie. Yet even with video evidence we don’t get justice. Because the triad of the courts, police and government twists the truth, manipulates the facts, jury and outcome. In the end even the judges don’t give the same sentences as they should to the rest of us. Why would a judge who relies on police to protect them hold them to the same level of accountability? They’ll always blame it on law which they’re part of the same system which created it and influenced it. A selective system, an unjust system and most of all a broken system which must be exposed for what it is. A fraud, a lie and a tool used by government and the rich. Justice should never be based on money.

Why is one man sent to prison for posting on Facebook while another because he’s a cop and kills never spends a day in jail? WHY IS CARY-ANDREW CRITTENDEN IN PRISON? Because he lacks money or power (part of government)

Now it’s all about MONEY, NOT JUSTICE and how much lawyer (Justice) you can buy. Or as in police it’s your biased relationship with the court.

THE VICTIMS
Mira Sorvino: Why I Spoke Out Against Harvey Weinstein
Ronan Farrow says Weinstein protected by “machine designed to keep these claims quiet”
Multiple women share harrowing accounts of sexual assault and harassment by the film executive.
17 accusers share their stories of Harvey Weinstein’s alleged advances
Here are all the women who have accused Harvey Weinstein of sexual abuse so far
Jamie Lee Curtis Calls Harvey Weinstein ‘Brutish Thug’ and Shares Her Own Sexual Harassment Story

Why was Harvey Weinstein fired from the company he co-founded with his brother Bob?

The board of directors said it was due to mounting allegations of misconduct by the famously volatile Harvey Weinstein. But privately Harvey Weinstein suspects something else.

“Harvey Weinstein is convinced this was a takedown,”.

Specifically, Weinstein has been telling confidants that he believes Bob is behind last week’s damaging New York Times investigation and the board’s subsequent decision to fire him.

“He feels betrayed by his brother,”. But it strikes some onlookers as nothing more than an excuse by Weinstein — a convenient alternative to the prevailing view that decades of improper behavior has finally caught up to him.

Bob was one of the board members who voted to terminate Harvey Weinstein on Sunday.

Bob and the company’s chief operating officer and president David Glasser are now jointly running the imperiled studio. Harvey Weinstein has told friends that he blames both Bob and Glasser.

Related: Harvey Weinstein has been fired. So what’s next? Harvey Weintstein is “humiliated” by the stories about his alleged pattern of harassment.

Harvey Weinstein is not the only figure under scrutiny. There are a row of outstanding questions about how much the company’s board members — including his brother Bob — did or did not know about his conduct with women.

The Times story last Thursday cited “two company officials” who said Weinstein had paid at least eight settlements to women over the course of decades.

Chapman said in a statement, “My heart breaks for all the women who have suffered tremendous pain because of these unforgivable actions. I have chosen to leave my husband Harvey Weinstein. Caring for my young children is my first priority and I ask the media for privacy at this time.”

Harvey Weinstein’s estranged wife, Georgina Chapman, is leaning on fellow scorned spouse Huma Abedin after announcing that she is leaving the movie mogul.

A well-placed source tells Page Six that Marchesa co-founder Chapman reached out to Abedin, the soon-to-be ex-wife of convicted sex offender Anthony Weiner, as the scandal engulfing her movie-mogul husband intensified and more women — including Angelina Jolie and Gwyneth Paltrow — came forward with allegations that Harvey Weinstein had sexually assaulted or harassed them.

Chapman and Abedin, Hillary Clinton’s top aide, have known each other for some time because of Harvey Weinstein’s numerous fundraising events for the former presidential hopeful. Plus, the Clintons rented a Hamptons house next door to Harvey