Home Arizona What Do Harvey Weinstein and Tani Cantil-Sakauye Have in Common? Abuse of Power

What Do Harvey Weinstein and Tani Cantil-Sakauye Have in Common? Abuse of Power 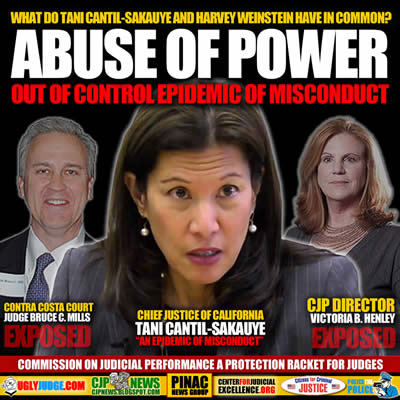 What Do Harvey Weinstein and Tani Cantil-Sakauye Have in Common? Abuse of Power
“California Judges Are High on the Predator Scale”

A must read article how we’ve exposed just the tip of the iceberg in “Abuse of Power” and victimizing people with money and power.
CORRUPTION WATCH-The most compelling words in Ronan Farrow’s article about the predator Harvey Weinstein in the October 23, 2017 issue of The New Yorker magazine are its first three: Abuses of Power. The salacious aspect of the story may initially attract public attention, but the essence of the it revolves around power – the abuse of power. And that is where the focus should remain. A predatory abuse of power permeates our entire society – a society that has made a lying pussy-grabber its Predator-in-Chief.

The largest class of people who have been victims of these predators have been women and they have served notice on the nation that they are removing themselves from the victim category.

Ronan Farrow’s article details how Weinstein used his power to enlist the aid of others to hide his behavior and make sure his victims would be silenced. Everyone around him was corrupted; some actively helped Weinstein; others pretended not to know. By using the threat of ruining peoples’ careers and imposing confidentiality agreements, he forced his victims to be silent. One interesting aspect of these confidentiality agreements is that many of the victims seem not to have brought lawsuits, but were merely telling people.

Did Weinstein’s lawyers initiate the contact with these victims knowing that confidentiality agreements would be the end result? Such behavior would seem to destroy any confidentiality between Weinstein and his attorneys since they would be aiding and abetting him to cover-up his criminal behavior.

There is a world of difference between a criminal coming to his attorney because he is being civilly sued — in which case the attorney-client confidentiality privilege attaches — and a client’s coming to an attorney so that the attorney will proactively conceal evidence of a crime. Predators are adept at polluting everyone around them. Bribery occurs when the attorney (1) gives or offers a witness, (2) cash or something of value, (3) with corrupt intent, (4) to influence the testimony of that witness. Penal Code § 137(a).

“Publicity is justly commended as a remedy for social and industrial diseases. Sunlight is said to be the best of disinfectants; electric light the most efficient policeman.”

As the disinfecting sunlight of #MeToo shows, predators and their victims are everywhere. Just recently, women in Sacramento spoke out about the predators in and around state government.

California Judges Are High on the Predator Scale

Some of the nation’s worst predators are found in the California judiciary. The Ninth Circuit Court of Appeals (Federal court) has accused the state courts of having “an epidemic of misconduct.”

Listening to a direct link to that 9th Circuit Hearing, it is apparent that the persons that the three federal judges are pointing to are both women: former CA Attorney General Kamala Harris and California State Supreme Court Chief Justice Tani Cantil-Sakauye. This highlights the important fact that all power abuses.

Then Attorney General Harris had done nothing to the prosecutor who not only used a lying jail-house informant but who had also taken the stand and committed perjury to bolster the lying informant’s credibility. As Tani Cantil-Sakauye had been California Chief Justice for four years, the indictment that the entire California judiciary had a “epidemic of misconduct” was directed at her, the person who presided over the entire system. As the federal judges made clear, a state does not have an epidemic of misconduct without the complicity of the judges and justices.

But wait, doesn’t California have a Commission on Judicial Performance (CJP) to ferret out judicial misconduct? Not really. Don’t judge a book by its cover. (Harvey Weinstein would only wish he had such an effective system as CJP to intimidate his victims.) From its current machinations, the CJP continues to champion California’s judicial predators.

A lot can be learned about the CJP’s predatory ways by examining its fight to prevent the State Auditor from conducting an audit of its activities. Government Code § 8545.2 requires public agencies — “whether created by the California Constitution or otherwise” — to grant the Auditor access to all agency documents for purposes of an audit or investigation, including documents that “may lawfully be kept confidential as a result of a statutory or common law privilege or any other provision of law.”

To protect judicial predators from sunlight, the CJP has sued the State Auditor in the case: Commission on Judicial Performance v Elaine M Howle, San Francisco Super Court # 16-515308.  The grounds are that its files are “confidential,” ignoring the fact that the statute authorizes the Auditor to review confidential files.

The CJP invents a special form of confidentiality for itself which it terms “absolute immunity.” This claim of absolute confidentiality is typical behavior of abusers like Harvey Weinstein who also thought that he was special and he could continue doing what he was “used to doing” – being a sexual predator. The CJP Rule 102 which sets forth the scope of its “confidentiality” does not use the word “absolute.” In fact, Rule 102 contains sixteen confidentiality exceptions, among them, “information (to prosecuting authorities) which reveals possible criminal conduct by the judge or former judge or by any other individual or entity.” Rule 102(g)

The State Auditor does not publish these files; it reviews them in order to conduct its audit of how the CJP is behaving. The only people who can be “harmed” by the auditor’s review are the CJP personnel and cohorts and judges and justices who may have received special favors. How many complaints against the Chief Justice have been squelched?

When CJP receives thousands upon thousands of complaints with virtually no removals, something is amiss (11 judicial removals since 1995). After the federal courts have found an epidemic of misconduct which it attributes to the judges, the handwriting is on the wall. The CJP has been protecting the judicial predators who have been preying upon the public for decades. There cannot be an epidemic of misconduct without wrong doers.

What are the State Auditor’s duties when it uncovers criminal behavior?

No, the Auditor should take action. Allowing the State Auditor to see the CJP records will expose the decades long cover-up of the epidemic of predatory behavior which the federal court has decried.  And just like with Harvey Weinstein we know how the house of cards falls when confidentiality finally falls.

Louis Brandeis’ “sunlight of publicity is the best disinfectant” proclamation must make him the CJP’s most disliked jurist.

(Richard Lee Abrams is a Los Angeles attorney and a CityWatch contributor. He can be reached at: Rickleeabrams@Gmail.com. Abrams views are his own and do not necessarily reflect the views of CityWatch.) Edited for CityWatch by Linda Abrams.

ORIGINAL STORY CAN BE FOUND HERE

RECENT ARTICLE CONCERNING THIS STORY HERE
Judge Bruce C. Mills
California is well known for corruption and fraud which takes place in our courts by criminals like Judge Bruce C. Mills. A poster child for how you can take a dishonest person and drap them in a black robe and call them honorable when in fact they have no honor at all. What’s worse is what a joke the Commission on Judicial Performance is, how they ignore valid complaints and refuse to protect the public.

In a decision First Amendment experts have dubbed “outrageous,” a Contra Costa Superior Court judge Bruce C. Mills jailed a San Ramon man for writing about his divorce on the internet — even though his writings were based on material publicly available in court files.

The judge Bruce C. Mills, insisted in his decision that “matters that are put into court pleadings and brought up in oral argument before the court do not become public thereby” — a position that lawyers say fundamentally misunderstands the nature of court records.

Joseph Sweeney, a judicial reform advocate, served 13 days in County Jail in August after Judge Bruce C. Mills’ ruling, which found that Sweeney’s web postings had violated another judge’s restraining order not to disclose the contents of his ex-wife’s cellphone or computer. The postings described Sweeney’s realizations about her medical history and contact with others that led to the collapse of the marriage.

The information became publicly available in court documents when it was filed without seal by his ex-wife, and in an online appellate court decision upholding the order. As a result, “the cat is out of the bag and the general presumption that publicly filed documents may be read by all carries the day,” said Floyd Abrams, considered among the top First Amendment lawyers in the United States, in an email to this newspaper.

Several other free speech experts also said Judge Bruce C. Mills’ assertion that the information was not public record is flatly wrong. Martin Garbus, widely considered one of the top trial attorneys in the United States, said court documents filed without a sealing order are legally just as public as newspaper articles.

A report cataloging serial acts of misconduct spanning more than 10 years by Judge Bruce C. Mills has been leaked to the public by a court watchdog and whistleblower group.

The 51-page dossier collected both public and “secret” discipline prosecutions against judge Bruce C. Mills  by the Commission on Judicial Performance, the state agency responsible for judge oversight and accountability. The report is embedded at the end of this post.

The report reveals that in addition to two well known public disciplinary actions taken against the veteran Contra Costa County jurist, Mills was also found guilty in three additional incidents where the type of discipline and name of the offender were “private” and not revealed to the public.

The group identified judge Bruce C. Mills as the offending judge in the secret proceedings by reverse engineering details from the public disciplinary actions and cross referencing the information with old CJP annual reports. The acts of public and private misconduct occurred in 2001, 2006, 2008, 2011 and 2013.

judge Bruce C. Mills, 62, a judge since 1995, has until Oct. 31 to file a written answer to the administrative charges. The agency will then schedule a hearing before a panel of special masters appointed by the California Supreme Court.