Home Facebook Hammond Ranch Which Side are you On

Hammond Ranch Which Side are you On 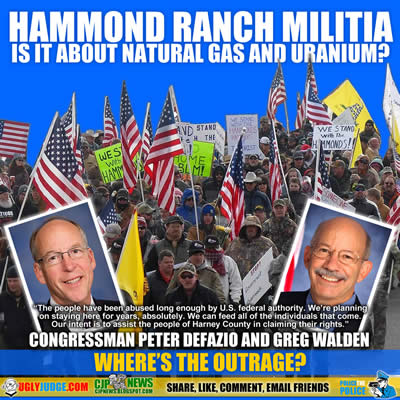 Remember the old saying “FOLLOW THE MONEY” It applies to everything in America, dishonest people will do almost anything for it.

Government positions, law and authority are often used to abuse the public and help dishonest people profit or gain power. From one judge in a small probate court room that robs a senior of her rights, life savings and freedom by allowing dishonest lawyers and government to profit. To an entire congress that cares more about corporations and money than the people they serve.

Regardless of Your Stance on Bundy Ranch 2.0, Supporting the Bureau of Land Management is Wrong

It’s not the first time criminals hiding behind government titles were exposed for fraud. Check out U.S. Geological Survey Bulletin 1740-B

Check out these stories, which one do you believe?
HAMMONDS TARGETED BECAUSE GOVERNMENT WANTS TO STEAL THEIR LAND
Oregon: Hammond Case: Abuse of Power by BLM, FWS and US Attorney
Rep. Greg Walden says Keystone XL pipeline would create 20,000 ‘American jobs’ with 800 in Oregon
Hammond Case: What can you do?
“Militia” Take Over Malheur National Wildlife Refuge In Protest to Hammond Family Persecution
The story behind the Oregon armed standoff
Two members of Oregon’s Hammond family to serve time in prison after burning 140 acres of BLM land
Video…Breaking News: Obama Orders Hammond Ranch Destroyed!
Here’s the story the corporate media will not tell you
Oregon militia takeover: How did we get here?

Dwight Hammond, 73 and son Steven Hamond, 46, were prosecuted and convicted as part of an effort to remove the Hammond family from their ranch land.

In October Tri-State Livestock News did a story on the Hammonds and the sentence they received for inadvertantly burning about 140 acres of Bureau of Land Management (BLM) rangeland in two separate fires.

“The jury convicted both of the Hammonds of using fire to destroy federal property for a 2001 arson known as the Hardie-Hammond Fire, located in the Steens Mountain Cooperative Management and Protection Area,” states a Department of Justice news release cited by the livestock industry trade publication.

According to the article the BLM often worked with ranchers on collaborative burns to manage invasive juniper that steal water from grass and other cover. Erin Maupin, a former BLM range technician and watershed specialist and rancher in the area, said backfires by other ranchers had burned BLM land in the past and the agency had not taken action.

During her tenure as a full time BLM employee from 1997-1999, Maupin recalled other fires accidentally spilling over onto BLM land, but only the Hammonds have been charged, arrested and sentenced, she said. Ranchers “would call and the BLM would go and help put it out and it was not a big deal.”

On the other hand, Maupin said, there were numerous instances of BLM fires spreading to private land and ranchers losing significant numbers of cattle and other property. Maupin said she was unaware of the BLM compensating ranchers for destroyed property.

Regardless of Your Stance on Bundy Ranch 2.0, Supporting the Bureau of Land Management is Wrong

This week, militia members have begun a standoff with federal agents after occupying Malheur National Wildlife Refuge HQ in Oregon. The protesters are refusing to leave and are demonstrating against the impending imprisonment of two ranchers, and the overreaching policies of The Bureau of Land Management, a federal agency that has been appropriating land for their own benefit.

The organization claims that they are environmentalists and that their goal is conservation. However, they have made many moves over the past several years that expose their true motives. Not only are they responsible for killing protected species of animals, but they also regularly sell off land that they have appropriated to fracking companies that will obviously be destroying the ecosystem.

In 2013, it was reported that the BLM sold 29 federal land leases which covered more than 56 square miles in northeast Nevada. The agency itself reported that the oil and gas leases in Elko County sold for $1.27 million to six different companies.

Every single one of these leases was purchased under the pretense that they would be used for natural gas fracking, a process that is known to contaminate water supplies and destroy local ecosystems.  The BLM claims that they are seizing land to preserve it for environmental protection.  However, it is evident that environmental protection is not their goal if they are selling vast areas of land to fracking companies.

That same year the BLM was sued in California for their business with fracking companies. According to the lawsuit, the BLM violated the National Environmental Policy Act by turning over federally protected land to fracking companies.

Researchers at Berkley reported, “The Northern District of California court held that when BLM sold four leases in 2011 for 2,700 acres of federal land in Monterey and Fresno counties, it violated NEPA by relying on outdated environmental reviews that did not address the increased prevalence of fracking in California and nationwide. The court found that BLM’s dismissal of development scenarios involving fracking as “outside of its jurisdiction” was insufficient to provide the “hard look” at environmental consequences required by NEPA.”

According to Berkley’s research, the BLM manages approximately 248 million acres and is responsible for about 700 million acres of subsurface mineral resources in the United States. These lands and resources are not held for conservation purposes, but instead large areas are auctioned off to fracking companies.

The investigation by the Office of the Inspector General of the U.S. Department of the Interior revealed that the BLM had sold approximately 1,800 wild horses to a man with connections in Mexico, who then promptly sent the horses to be turned into meat.

The rhetoric and public relations campaigns put forward by organizations such as the BLM are crafted to portray government agents as environmentalist crusaders, when in reality, many actions that these organizations take impact the environment and its creatures in a negative way.

Check out these videos
Think about it this way

More coverage at Pete Santilli on You Tube