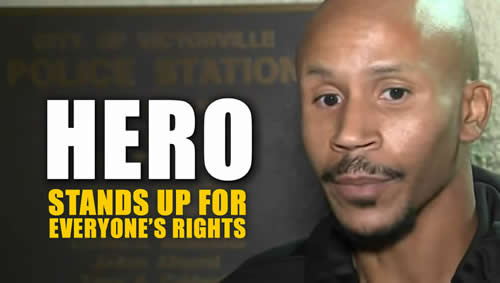 Disgrace to all Law Enforcement, Sheriff please FIRE this problem cop who really is nothing more than a criminal
Calif. Sheriff’s Deputy Caught on Video Threatening to ‘Create’ Charges and Send Man to Jail.

Imagine if this officer arrested and destroyed the video and got away with a false arrest and violation of this mans rights. This should not be tolerated period. It’s a huge sign of a problem cop who has no business with any authority or weapon

This is very common and how police are used as “dogs” to sic people when they stand up for their rights. “My Lobby”?

Authorities in California are investigating after a video surfaced showing a San Bernardino County sheriff’s deputy threatening to create charges and throw a man in jail.

Duncan Hicks went into the Victorville sheriff’s station Jan. 20 around 11 a.m. to file an incident report regarding a child custody issue. He told the Los Angeles Times that when he tried to file the report, the deputy at the front desk told him, “You know, Duncan, you got baby mama drama.”

Hicks, a 34-year-old Victorville resident, said that the deputy would not allow him to file a report and told him to leave the station, which he did, but then he decided to return and record his interaction with the deputy.

Hicks tried again to get an incident report, and he asked the front desk clerk for the deputy’s badge number.

“OK, Duncan,” the deputy said. “You know what, man? I am about getting tired of you, and you are about to go to jail, just so you know.”

Hicks asked the deputy, “What am I going to jail for?”

“I’ll create something, you understand?” the deputy responds. “You’ll go to jail. You understand that?”

Hicks told the deputy that his actions would violate the law, and the deputy told Hicks that recording him is illegal and threatened Hicks with jail for doing that, too.

According to the San Bernardino County Sheriff John McMahon, recording inside sheriff’s stations is allowed.

“At that moment, I was in duress,” Hicks told the Times. “For him to say that, I didn’t know what was going to happen.”

The video has been reviewed by McMahon, who said that the employees’ responses were “not consistent” with his expectation of customer service.

“Additionally, the deputy’s responses are not consistent with the interpretation of the law,” McMahon said in his statement.

In other words, the deputy flat-out lied and was rude and disrespectful.

It sounds as if Hicks may have some issues with his child’s mother pertaining to custody, because the report says that he had been at the station three times trying to get something on record. That a sheriff’s deputy who is a sworn public servant would choose to be condescending rather than helpful to someone in that situation speaks volumes.

It doesn’t matter whether Hick goes down there to file a report each time he and the child’s mother exchange the kid; the deputy should hold back on his commentary and just do his job.

McMahon said that the sheriff’s department is conducting an administrative investigation in which it will also look at all of Hicks’ prior contacts with deputies to “ensure all previous contacts were professionally handled.”

“Once we determine the outcome of our investigation, appropriate action will be taken,” McMahon said.

Hicks told the Times that he hasn’t spoken to anyone from the sheriff’s department about the investigation, but he doesn’t “feel confident going back” to the station and he wants the deputy fired.

“Nobody should be treated differently,” Hicks said. “Their job is to protect and serve.”

Duncan Hicks captured a disturbing encounter on his cell phone while trying to file a report inside the station. Now the sheriff says his deputy was out of line.