Home Facebook Had Enough is that the message people are sending police, judges, lawyers and government who are above the law

Had Enough is that the message people are sending police, judges, lawyers and government who are above the law 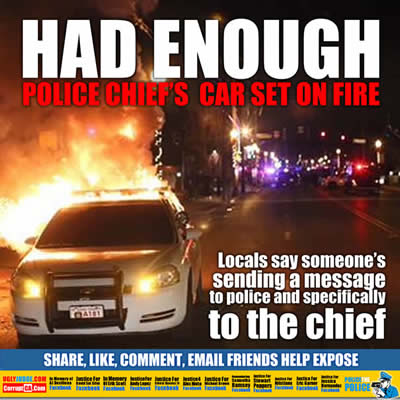 With more people being killed by police than war why is it no one is doing anything about the real terrorists in America? The numbers of victims is growing at an alarming rate. Innocent, unarmed people are being shot to death by police officers who never should have been given a gun. Judges  ruling against  justice and victims in favor or supporting obvious criminals and their crimes. We see it everyday, where an officer claims his life was in danger so he had no choice but to execute a life. Fact is video evidence and witnesses often tell a totally different story.

Have you or someone you know been affected by Police, local government or a dishonest judge?

Had Enough is that the message people are sending police, judges, lawyers and government who are above the law?

Just outside of the Beverly Hills Police Department in Missouri, the police chief’s cruiser was completely set on fire.

Locals say that someone is trying to send a message to the police department and to the chief specifically.

In typical government fashion, they do the crime and the tax payer is forced to pay the fine. Which means the chief will end up being rewarded with a brand new car at the expense of the tax payer. Which brings up a good question, when will we hold police, judges and local government personally accountable and responsible for their actions or lack of them?