Home Arizona How Easy is it to Bribe a Judge?

How Easy is it to Bribe a Judge? 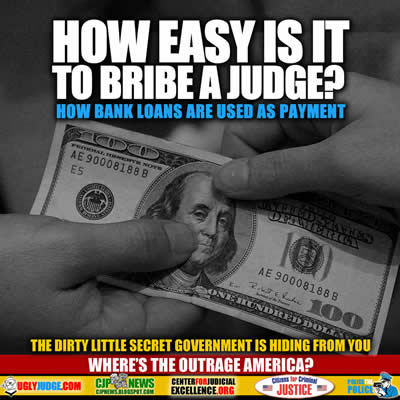 How Easy is it to Bribe a Judge and Get away with it?
It’s too easy and has been going on for decades. Remember a judge is nothing more than a lawyer who is given immunity and a black robe. The honor and integrity must be earned but far too often judges abuse their powers because as they say Absolute power corrupts”. The problem then is the broken relationship between authorities and the court who are often friends. Police doing favors for the courts and courts returning those favors has bred a biased and unjust environment.  Federal Laws On Bribery

(a) Whoever
(1) corruptly gives, offers, or promises anything of value to any person, with intent to influence or reward an officer, director, employee, agent, or attorney of a financial institution in connection with any business or transaction of such institution; or

(c) This section shall not apply to bona fide salary, wages, fees, or other compensation paid, or expenses paid or reimbursed, in the usual course of business.
(d) Federal agencies with responsibility for regulating a financial institution shall jointly establish such guidelines as are appropriate to assist an officer, director, employee, agent, or attorney of a financial institution to comply with this section. Such agencies shall make such guidelines available to the public.

[poll id=”1″]
Judges abuse all their powers to help cover up their crimes. They abuse their immunity and hide behind the robe and courtroom walls ruling over you because they are in fact “Above the law”.

Lawyer Richard I Fine Story exposing almost ALL of Los Angeles County Judges for accepting Bribes
Los Angeles, California — Once a dapper Beverly Hills attorney known for his bow tie, Richard Fine has been held in solitary confinement at Los Angeles County Men’s Central Jail for 14 months, even though he’s never been charged with a crime.
Fine, a 70-year- old taxpayer’s advocate who once worked for the Department of Justice, is being held for contempt of court.
Superior Court Judge David Yaffe found Fine in contempt after he refused to turn over financial documents and answer questions when ordered to pay an opposing party’s attorney’s fees, according to court documents.
Fine says his contempt order masks the real reason why he’s in jail. He claims he’s a political prisoner.
“I ended up here because I did the one thing no other lawyer in California is willing to do. I took on the corruption of the courts,” Fine said in a jailhouse interview with CNN.
More details on the Special Investigations Unit’s blog
For the last decade, Fine has filed appeal after appeal against Los Angeles County’s Superior Court judges. He says the judges each accept what he calls yearly “bribes” from the county worth $57,000. That’s on top of a $178,789 annual salary, paid by the state. The county calls the extra payments “supplemental benefits” — a way to attract and retain quality judges in a high-cost city.
While the practice of paying supplemental benefits is common in California, most high-cost cities elsewhere don’t hand out these kinds of benefits. Judges in Miami, Chicago and Boston receive no extra county dollars.
Judges in Los Angeles County not only have the highest state salaries in the nation, they also get tens of thousands of dollars in county benefits. These payments, Fine says, mean judges are unlikely to rule against the county when it is involved in a lawsuit.
In the last two fiscal years, Los Angeles County won all but one of the nine trials that went before a judge, according to Steven Estabrook, the county’s litigation cost manager.
“The reason I’m here is the retaliation of the judges,” Fine says. “They figured they’re going to throw me in jail and that way they feel that they can stop me.”
Fine’s decade-long crusade against the judges eventually led to his disbarment last year. Joe Carlucci was the lead prosecutor for the California State Bar. Carlucci says whenever Fine lost a case, he would appeal and argue the judges were corrupt.

This is what happens to Whistleblowers.
ATTORNEY SEARCH

ARE THE JUDGES INVOLVED?
However, at least two of the judges involved in Clark County guardianships may have also had their mitts in the cookie jar. A review of the mortgage histories of Family Court Presiding Judge Charles J. Hoskin, who ascended to the bench in 2009 (first having served as a temporary judge since 2002) and Judge William Voy, who has sat on the bench in Clark County since 1998, raises  questions about the possibility that they are laundering “extra benefits” through their mortgages.

A money laundering scam using home loans as the vehicle for bribery is exquisitely simple and nearly undetectable: Judge X takes out a loan and Mr. Y pays it back.

Hoskin has made some effort to obscure his ownership of the property. The Clark County Assessor’s site records his ownership only as “Taxpayer” and records the property location as that of the Assessor’s office.  The document link to the sale record is also obscured and given the bogus document number of * 99999999:99999

Hoskin’s tenure as a permanent judge began in 2009 with a salary of approximately $160,000 per year. Spread equally over 15 years and excluding interest rates, that would amount to over $133,000 per year to pay off the loans, leaving Hoskin with a remainder of $27,000. That would be before taxes.

ARE THE FEDS INVOLVED?
Recently, the US Attorney’s office in Los Angeles was approached with evidence of  the prevalence of bought-off judges. An official with the Public Corruption Unit, Marve Williams, took the call. This is an accurate rendition of what then transpired:

Following accumulating evidence that judges are laundering bribes through their home loans, I called the US Attorney’s office in Los Angeles, asking to speak with someone in the public corruption unit.

I shortly received a call back from a Marve Williams, who identified herself as working in the citizens complaint division of that office.
I explained to her that I had amassed evidence pointing to criminal money laundering by California judges.
Ms. Williams informed me (hang onto yer hats….) that the Department of Justice has no jurisdiction over judges. “You will need to contact the Commission on Judicial Performance,” she intoned. “Judges police themselves.”
“Ma’am!!” I replied. “If judges break the law they are held to the same measure as anyone else. These may be federal crimes and your office indeed has jurisdiction!”
Marve tried to argue this point with me but was clearly losing the battle of words. She then took another tack.
“You are not allowed to report on this conversation or to quote me,” she informed me.
“Ma’am!” I yelped. “I identified myself as a journalist in the first minute of our phone call. You cannot inhibit me or instruct me from reporting what transpired here.”
“You are not permitted to report this,” she retorted.
“Bull puckey!” I replied.

And then Marve disconnected the call.

Conservatorship and Guardianship abuse by Judges, lawyers and family (Elder abuse and crimes hidden behind courtroom walls)
Las Vegas: Sin City Harbors A New Kind Of Crime Ring
Disability Rights: When Is Taking Your Mother to Lunch a Felony?

VIDEOS
Scandal on the Bench, How Professional Guardianship is abused by judges who are paid via bank loans
Sean Stone sits down with Investigative Journalist Janet Phelan and discovers the latest scandal involving Judges and alleged money laundering schemes.

Guardianship Fears, what government is hiding from you, the BILLION dollar court business of robbing the weak, defenseless and helpless

Conservatorship: Legalized Elder Abuse. Across the nation, elders are trapped in abusive guardianships and conservatorships. Victims are imprisoned and isolated from loved ones

What’s going on now with Richard I. Fine and how the court breaks laws and violates rights. Judge Yaffee is a criminal