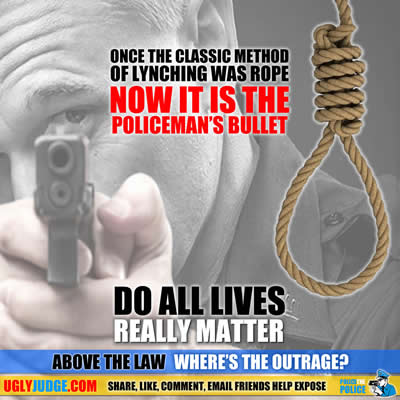 “Once the classic method of lynching was the rope. Now it is the policeman’s bullet … We submit that the evidence suggests that the killing of Negroes has become police policy in the United States and that police policy is the most practical expression of government policy … Force and violence systematically and consistently employed to quell the righteous anger of Blacks is justified by calling murder an exercise ‘law and order’.” — from We Charge Genocide, 1951 Petition to the United Nations edited by William Patterson, endorsed by W.E.B. DuBois, Paul Robeson, Harry Haywood and others.”

If all lives matter than every person killed by police would independently be investigated. An objective court, prosecutor, district attorney and lawyer would ensure that justice was not always labeled “Justified”. When it’s your loved one it matters, when it’s their loved one your loved one does not. It’s that simple. There are two classes in America, those who are “forced to obey the law” and those who are “above the law”.

Being above the law means you have a title such a police, judge or other public servant. Or you have money to buy justice. If you don’t have money or a title you’ll lose everything, be labeled guilty till proven innocent and spend time in jail. Matters not if your innocent, honest, hard working or doing the right thing.

What’s worse is you could end up dead and the word of your killer will be believed over the truth, even video or audio evidence. Your killer will not be subjected to what other criminals must endure. Polygraph testing, long and harsh interviews pressing for a confession, time in a cold cement walled jail cell away from family, loss of your job, treated as guilty and huge legal bills.

Fact is there really is no “Justice for all in America” and “All lives matter” is a lie.

Post-Modern American Policing Meets a Long “Bullet Lynching” Tradition
‘Operation Ghetto Storm’: The Enduring War on Black People in the US
Obama’s Task Force on Policing: Will It Be Different This Time?
In America the ‘Terrorists’ All Too Often Are the Police
We Charge Genocide (1951)
Once the classic method of lynching was the rope. Now it is the policeman’s bullet
How the PIC Structures Our World…We Charge Genocide…