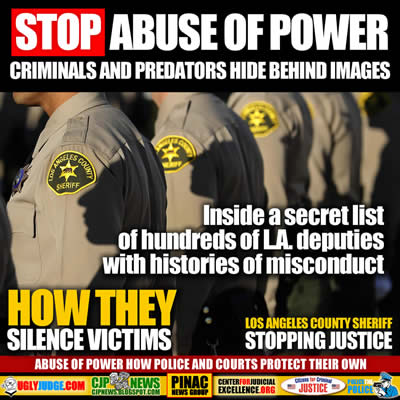 How Dishonest Los Angeles County Sheriff Deputies Hide behind an Image
It was a critical piece of evidence: an inmate’s shirt, bloodied from a jailhouse brawl.

When it went missing, Deputy Jose Ovalle had an idea.

He picked out a similar shirt, doused it with taco sauce and snapped a photograph, which was booked into evidence with the Los Angeles County Sheriff’s Department, law enforcement records show.

When confronted later, the deputy admitted to faking the blood.

Ovalle kept his job, but his name was placed on a secret Sheriff’s Department list that now includes about 300 deputies with histories of dishonesty and similar misconduct, a Los Angeles Times investigation has found. The list is so tightly controlled that it can be seen by only a handful of high-ranking sheriff’s officials. Not even prosecutors can access it.

Amid growing public scrutiny over police misconduct, Sheriff Jim McDonnell wants to give the names on the list to prosecutors, who are required by law to tell criminal defendants about evidence that would damage the credibility of an officer called as a witness. But McDonnell’s efforts have ignited a fierce legal battle with the union that represents rank-and-file deputies.

The dispute, which the California Supreme Court is expected to decide next year, is playing out in a state with some of the nation’s strictest secrecy laws on police misconduct. California is among 22 states that keep officer discipline from the public, but it is the only one that blocks prosecutors from seeing entire police personnel files.

The Sheriff’s Department’s roster of deputies, known as a “Brady list,” was compiled in 2014 under McDonnell’s predecessor, interim Sheriff John Scott, to keep track of officers with histories of misconduct that might affect their credibility in court. The list has evolved over time, and last fall the department notified several hundred deputies that their names were on the list and offered them the chance to object if they believed there had been a mistake.

Times reporters reviewed a version of the roster, dated 2014, and scoured court and law enforcement records for details of how deputies landed on it.

The documents reviewed by The Times offer the first public glimpse of officers whose misconduct the Sheriff’s Department has decided should be reported to the courts.

The deputies have been identified as potential witnesses in more than 62,000 felony cases since 2000, according to a Times analysis of district attorney records. In many of those cases, the deputies’ misconduct would probably have been relevant in assessing their credibility.

Lie, Abuse. how Los Angeles has landed on a secret list of 2014 problem officers