How Conspiracy Helps the Thin Blue Line Get Away with Murder 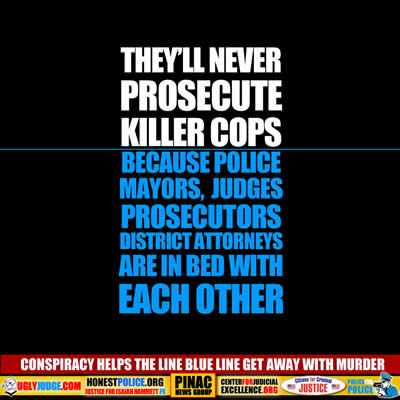 How Conspiracy Helps the Thin Blue Line Get Away with Murder

One thing ALL THE FAMILIES of victims find out the hard way is how they never get justice. How there are two classes of people in court, those above the law and those forced to obey. They lose their loved one more than once, the first time when they’re murdered, the second time when they destroy the victims character, the third time when they let the killer go free.

What America must see and be exposed to is how dirty the judges, prosecutors, district attorneys and mayor is as they help dangerous killers go free. They all know deep inside what they’re doing is wrong, a lie and a scam but they’re all in bed with each other. This must stop and they all must be held personally liable as accessories to murder.

To win his election campaign and oust the top state prosecutor in Omaha, Nebraska, Don Kleine first needed to secure the support of an influential group of voters.

Promising a return to “tough on crime” priorities, and attacking the incumbent county attorney’s new rehabilitative programs, Kleine clinched the endorsements of the region’s major police unions – and their thousands of dollars in election campaign contributions.

Ever since his 2006 victory, Kleine has relied on the officers of those unions to help him convict everyday criminals. Omaha officer Alvin Lugod, for instance, was called to appear as a prosecution witness a dozen times, according to records released by Kleine’s office.

The Guardian has been counting the people killed by US law enforcement agencies since 2015. Read their stories and contribute to our ongoing, crowdsourced project

Yet when Officer Lugod was facing possible criminal charges himself in February for fatally shooting an unarmed man in the back, Kleine saw no reason to step aside. Instead, the prosecutor oversaw a secret grand jury process that declined to indict his colleague.

The case was one of 217 this year where a police officer who killed someone was cleared of wrongdoing in a process led by a prosecutor who typically works alongside the officer’s department. The total represented 85% of all killings by police that were ruled justified in 2015, according to a Guardian analysis. This week, the police officer who killed 12-year-old Tamir Rice last year in Cleveland, Ohio, was cleared in the same way.

Criminologists, civil liberties activists and lawmakers said the arrangements created serious conflicts of interest at the heart of the criminal justice system’s response to killings by police.

“Prosecutors work with police day in, day out, and typically they’re reluctant to criticise them or investigate them,” said Prof Samuel Walker of the University of Nebraska. Describing Lugod’s case as a cause for concern, Walker said: “A major change in our standard legal practice, and the structure of our criminal justice system, is required.”

Calls for reform have been intensified by unrest across the US following a series of controversial deaths over the past 16 months. Barack Obama’s White House policing taskforce recommended in May that regional authorities should allow independent or special prosecutors to handle killings by their police officers if they want “mutual trust between community and law enforcement”.

Kleine, the prosecutor in Omaha, oversaw the clearing of officers involved in four deaths in 2015 – more than any other district attorney in the US. Their cases only made it to Kleine’s desk because he successfully campaigned to scrap a decade-old state law that had barred him from taking charge when an officer in his own county killed someone, to avoid bias.

Legislators in more than a dozen states are now attempting to wrest responsibility for investigating deadly police incidents from local DAs and hand it to state-level or other special prosecutors. They argue that urgent action is needed to bring impartiality to the judicial system when officers of the state end someone’s life.

MUST READ STORIES HOW THEY LET KILLER COPS GO FREE AT YOUR FAMILIES EXPENSE
Ties that Bind
Who Shouldn’t Prosecute the Police
Prosecutors and police: The inherent conflict in our courts
It’s A Complicated Relationship Between Prosecutors, Police
Tense Relations Between Cops, Prosecutors Fall Out From Freddie Gray Cases
Attorney-judge relationships raise ethical questions

Bob Avakin Tells it the way it is in this video