Home Archive by category "Who is UGLY"

What’s really going on in America

Janet Phelan is an example of a good, honest, law abiding citizen who was victimized by an obviously corrupt Justice system where judges and lawyers are all about greed and profit.

In the video Janet hits the nail on the head what’s going on in America today. The corruption is so bad people are leaving in numbers, victims are made out to be the villains and end up homeless by a system based on “How much Justice you can afford.

The fact is all divisions of our court system today have an epidemic of judicial corruption where the courts have become weaponized. No amount of evidence, witnesses and even audio or video means anything when the judge is being bribed.

Janet brings up a solution to prove bribery may be involved by doing a financial background on your judge. Be sure to read the articles Janet Phelan has written over the years.

Most victims of our justice system never thought they’d be victimized, the problem is we trust an image, badges, uniforms and things like a black robe which is suppose to represent “honor”. Little do we know bad lawyers become worse judges who weaponize the court where police or outside agencies don’t go. Imagine that, you figure out the court is totally corrupt and government does nothing, you even find out chances are they’re involved as well.

In my case I had a sibling who I always knew was cold and different but found out she’s a psychopath. I found this out in the process of growing up with her and her specific psychopath behaviors. Sadly my entire family was destroyed by this beast, liar, con-artist and criminal. Yet all involved from Los Angeles Superior Court Probate department ignored the fact she embezzled over $200k in bank accounts prior to filing a totally fraudulent petition forcing our mother into a fraudulent conservatorship. Yes, it’s that easy, lie thru your teeth, even your lawyer can perjure his petition knowing he’ll be generously rewarded in huge legal fees for elder abuse, fraud, embezzlement and conspiracy. The Bar will accept your complaint but play stupid, why because whenever you have lawyers overseeing lawyers or police overseeing police they protect their own. Worse there are lawyers who shop judge dinners for backdoor deals. Our court system is infected with   dishonorable judges who can be bought via bank loans they never have to pay back.

So it comes down to the fact “Laws are only words on paper and mean nothing if ignored”. People unaware of what’s going on in American courts today think court is about evidence, witness testimony, justice, law and rights. But once victimized they find out it’s about dirty, slimy, slick lawyers who ignore law and rights because the game is not knowing law but cheating the system via back door bribery deals.

The Epidemic they don’t talk about 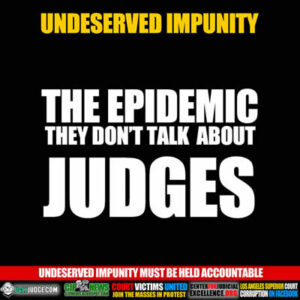 Whistle blower Hero Julian Assange IS THIS WHAT GOVERNMENT DOES TO PEOPLE WHO COME FORWARD WITH GOVERNMENT CORRUPTION AND CRIMES? Julian Paul Assange is an Australian editor, publisher, and activist who founded WikiLeaks in 2006. WikiLeaks came to international attention in 2010 when it published a series of leaks provided…

THE GUARDIANS is set in Las Vegas, within the Nevada Guardianship and Family Court systems involving the legal kidnapping of elderly people in a lucrative business that drains seniors’ life-savings and robs them of their freedoms. Victims and their families are caught in a scheme that has allowed corrupt court-appointed…

We are sending this timely special report that highlights one of the the reasons I have taken action with initiating the petition to impeach and remove Judge Anna Culley for her violation of federal and state laws. SIGN THE PETITION Reuters Special Report by Michael Berens and John Shiffman. Special…

George Floyd EXECUTED by Minneapolis Police Officer Derek Chauvin and Officer Tou Thao This was by all means a public execution by dishonest, abusive and racist police who act as Judge, jury and executioners. This is all too common and happens daily all over the US. Police have no accountability.…

WHAT GOOD ARE RULES OR LAW IF THEY’RE OFTEN IGNORED OR NOT FOLLOWED? What good are rules, code or law if NO ONE enforces them? Rule 8.4: Misconduct Maintaining The Integrity Of The Profession It is professional misconduct for a lawyer to: (a) violate or attempt to violate the Rules…

A totally corrupt legal system, a congress owned by corporations and big money, Abuse of power and immunity. America the land of so called freedom, justice, rights and equality is nothing but a LIE. A scam made up of propaganda and lies to help criminals and the powerful. All while…

Imagine that, infecting a nation has been done before. Now the shoe is on the other foot. But do we just take it and relinquish power like native people were forced to? Maybe what’s infected America is deserved? Why was it OK back then and now America hides behind words?…

A plea deal is an A A plea arrangement to resolve a case without going to trial. This is an option most often taken by those who cannot afford bail and want to go home instead of wait days, months, even years locked up in jail. An estimated 177,624 innocent…