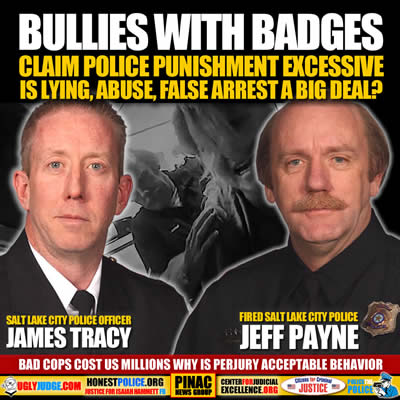 Bullies with Badges James Tracy and Jeff Payne Claim Police Punishment Excessive
It’s obvious to victims today that police punishment is a joke if anything and also the reason why so many bad cops get away with crime. They prove beyond a doubt that there are in deed two classes of people in America. Those forced to obey or else and those who don’t need to respect the people the law. Had it not been for the video evidence both officers would have gotten away with their violations and abuse by lying about it. Lying and perjury by police has become accepted and rationalized. Notice how the handling of the nurse has been labeld “manhandled” imagine if someone did this to one of these officers? The key here is what they really are going to do after saying “violated department policy and undermined public trust”. The department will rehire them and reinstate them after all the media attention goes away. Business as usual with typical “Imaginary justice” which is all for show and just a smoke screen. Why is it we’re sold a bill of “American’s all have rights” when it’s really just a select few who benefit from these so called rights?

Salt Lake City police detective Jeff Payne was fired and his supervisor James Tracy demoted for their roles in the arrest of a nurse who was manhandled and shoved screaming into a squad car as she tried to protect the legal rights of an unconscious patient.

Detective Jeff Payne was fired and James Tracy, his watch commander, was demoted two ranks from lieutenant to officer after an internal review by the Salt Lake City Police Department found their actions toward the nurse violated department policy and undermined public trust.

“I have lost faith and confidence in your ability to continue to serve as a member of the Salt Lake City Police Department,” Chief Mike Brown wrote in a termination letter to Payne that was posted by the Deseret News.

“I am deeply troubled by your lack of sound, professional judgment and your discourteous, disrespectful and unwarranted behavior, which unnecessarily escalated a situation that could and should have been resolved in a manner far different from the course of action you chose to pursue,” the letter read.

Jeff Payne is a 27-year veteran of the department, and James Tracy has worked in law enforcement for 22 years, spending nine years as a lieutenant in Salt Lake City. Attorneys for both men told local media that they plan to appeal the decision. (How many other incidents are there that were not on video or audio which did not get media attention should be the question) How many times to you need to get caught being dishonest for it to matter? How many victims are needed to stop a bad cop?

“I do think that Salt Lake City did a fair job of doing the investigation, and I think that their findings are, by and large, accurate,” Jeff Payne’s attorney, Greg Skordas, told the Salt Lake Tribune. “But I think the chief reacted to a lot of public pressure and scrutiny in making a decision that doesn’t fit the conduct.” How many times is it Ok to commit domestic abuse and can Jeff Payne’s actions be compared to the same?

Police body camera footage captured Payne erupting at nurse Alex Wubbels of the University of Utah Hospital on July 26 after she refused his request to draw blood from an unconscious truck driver who was involved in a head-on collision with a suspect fleeing police in another vehicle. FULL STORY

POLICE UNIONS ARE GANG LEADERS WHO HELP POLICE GET AWAY WITH CRIME
The Salt Lake City Police Association last week criticized the city’s handling of misconduct investigations for officers involved in the widely publicized arrest of a hospital nurse who properly refused to allow a warrantless blood drawing on an unconscious patient.

In a letter addressed to Salt Lake City Mayor Jackie Biskupski and Police Chief Mike Brown, the union specifically denounced what it called the “premature release of body cam footage,” which it claimed “corrupted” the investigations of two Salt Lake City officers. ( Actually the truth is it helped get justice and stopped a cover up)

Given that police unions are often the most vocal opponents of body camera use in general, it is hardly surprising the Salt Lake City Police Association is less than thrilled with the video’s release. What is surprising, however, is the association’s decision to argue about body cameras in this particular case.

Make sure you view the first video below before you take sides. Lets not forget the part about what they’ll do if she or the hospital does not do what they say? Is this extortion or again is this good police work and behavior?

Utah Mall Cop Jeff Payne Is Begging To Keep His Job: The Decision Will Come Soon

The unseen video of officer Jeff Payne saying he will bring the hospital all of the transients.