Home Arizona Are You A Victim of A Court that Ignores Evidence, Witnesses, Facts, Law and Truth?

Are You A Victim of A Court that Ignores Evidence, Witnesses, Facts, Law and Truth? 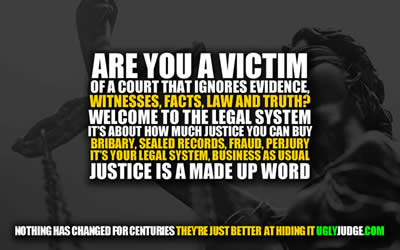 How Corrupt Judges are Destroying Our Society

Corruption destroys trust and without trust, society breaks down, as described by a piece in the July 22, 2018 issue of The New Yorker, “How E-Commerce Is Transforming Rural China,”by Jiayang Fan.

As Americans are learning, the judicial system is in shambles. California is especially bad, but it is not alone. See also this article. Unlike police officers, judges are free to do whatever they desire, hiding behind judicial immunity. (Mireles V. Waco (1991) 502 U.S. 9)

To add insult to the indignity of being preyed upon by corrupt judges, Californians have to endure the Commission of Judicial Performance [CJP], which is the watchdog agency where the wolves monitor the wolves who are feasting inside the hen house. Needless to say, this situation is lethal to justice, but due to judicial immunity, “us chickens” have no voice. While the CJP is supposed to discipline miscreant judges, it protects them.

The Role of Trust in Society

Because of corruption in the Chinese consumer market, no one trusted his on-line store. Hence, Liu was going bankrupt. However, when someone vouched for his honesty, people began to trust him. After a while his reputation for trustworthiness grew and people flocked to his website. Now JD.com stands right behind Amazon and Alphabet, Inc, (Google’s parent) as the world’s third largest company. Liu knew that actions do speak louder than words and America’s approach of offering lying platitudes about the great American legal system deceives few people. We need to restore integrity to our courts as Liu did to his online stores.

While China recognizes the need to end corruption, Americans have been encouraging it. When people tried to stop the corruption at Enron, the judges protected the fraud until the entire sham collapsed. Likewise, the courts protected the Wall Street criminals during the 2000s while they were destroying the world economy. After the Crash of 2008, there were no prosecutions. Meanwhile, China hands out life prison terms for corruption. FULL STORY