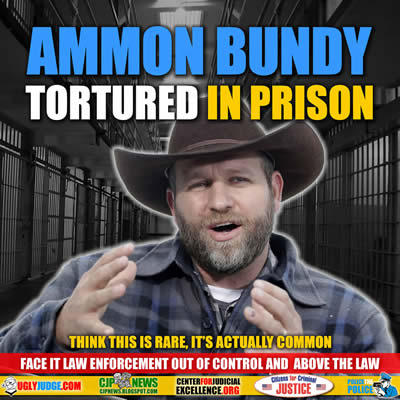 Ammon Bundy Tortured in Prison is nothing new. It’s been going on and approved by management for decades. Lets take Los Angeles County Sheriff Lee Baca who was resentfully found guilty and sentenced to 3 years in prison for his part in a prison scandal. It’s that easy to lie, file false reports and cover up crime and murder when done by law enforcement. Lets not forget innocent victims like Cary-Andrew Crittenden who was locked in prison for months (without a trial). All approved by a dishonest judge Socrates Peter Manoukian and a police and Sheriff department run by criminals who hide behind images and badges.

Where is FBI, Department of Justice and Federal authorities when these events are reported to them?

Want to do something then call and complain just to let them know you know. CALL 775 482 8110….option 8 for directory of all police. Option 1 for Sheriff.

I have always questioned the need for prisons.  They are an unjust means of justice.  Even more so, those that are for profit utilize the system to make money and push for quotas to be fulfilled by the states.

Here is just one recent example of such abuses of prisoners.  Ammon Bundy, who became a national household name during the Bundy Ranch siege in 2014 and the protests at the Malheur Wildlife Refuge in Oregon in 2016, was tortured and abused by a guard at CCA in Pahrump Nevada last week.  Subsequently, when word got out, the guard was sent home.

First, take a listen to a phone call from Ammon that was recorded as he was in solitary confinement. According to Bundy, he was handcuffed in a 3×3 foot shower for 13 hours, stripped naked and then thrown in the hole. This was all because he refused to allow a guard to take his shirt that was hanging off his bed, which the rules stipulate that nothing is to be hanging over the side. This was his only shirt to wear, and had it been taken, he would have not been allowed to come to breakfast.

FULL STORY WITH VIDEO AND PHOTOS

More supporting News stories
Torture and Abuse of Ammon Bundy at For Profit Prison not Going Unnoticed
THE TORTURE OF AMMON BUNDY BEGAN SHORTLY AFTER HE MADE A CONTROVERSIAL STATEMENT
Are They Really Torturing Ammon Bundy?
Bundy supporters say Ammon was tortured in prison
Ammon Bundy tortured in Pahrump, NV jail

Day 9 at Camp Liberty; Protest the Torture of Ammon Bundy

Ammon Bundy from Jail! What is A Good Cop?