American Justice System is based on Lies and Money not Justice 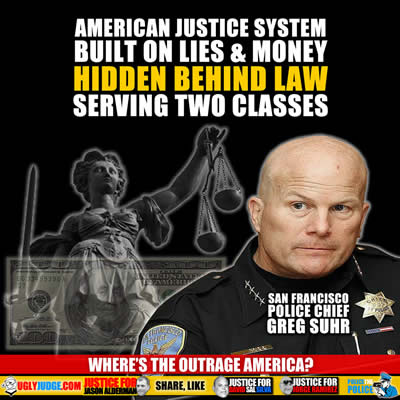 American Justice System is based on Lies and Money not Justice

As long as Law does not apply equally to everyone there will be no justice in America. What’s happening with Police is the same problem which haunts our justice system. When you have Police overseeing and investigating themselves there is no justice. The same goes for judges and lawyers who are controlled by a bar and commission run by judges and lawyers. The result is two classes, those forced to obey law and those above the law.

The scams and lies used by police, judges, lawyers and government are the same. Lie to the tax payer, hide the truth, destroy evidence, claim you’re investigating your own. Destroy the character of the victim and manipulate law. Refuse to prosecute those who work with you. When they do it, it’s business as usual however if you do it, it’s called perjury, destruction of evidence etc.

San Francisco Police chief Greg Suhr has a history of issues. Suhr is an example of how simple it is for problem people to get into management. Working their way up the ranks like a cancer rotting everything they come in contact with.

What must be exposed is the scam of resigning which means the person retains their benefits, peace officer status and the ability to go on doing what they did. Yet if those forced to obey law were exposed for the same crimes they’d be prosecuted.
Lose everything and not get a second chance. You’d be in a jail cell losing everything you fought so hard to earn proving your innocence. While they get paid leave and never spend a day in jail. Sound fair?

“Lee said he was not going to turn the city over to what he called “the mob mentality,” said our sources, who spoke on condition of anonymity.”

Those forced to obey law are taking a stand and speaking out. When the tax payer takes action due to nothing being done by government their called “the mob mentality” yet when police beat people, murder them, strong arm them and use their status to commit crimes its all ignored and down played.


It’s no longer about protecting and serving the public, instead it’s about abusing their power, deadly force and PO status

The lying has gone on too long, video evidence is clear she was arrested (not detained as police often claim)

The cover up, lies goes on an one which exposed how deep and bad the problem really is